As hospital patients were evacuated, nurses went, too

As hospital patients were evacuated, nurses went, too 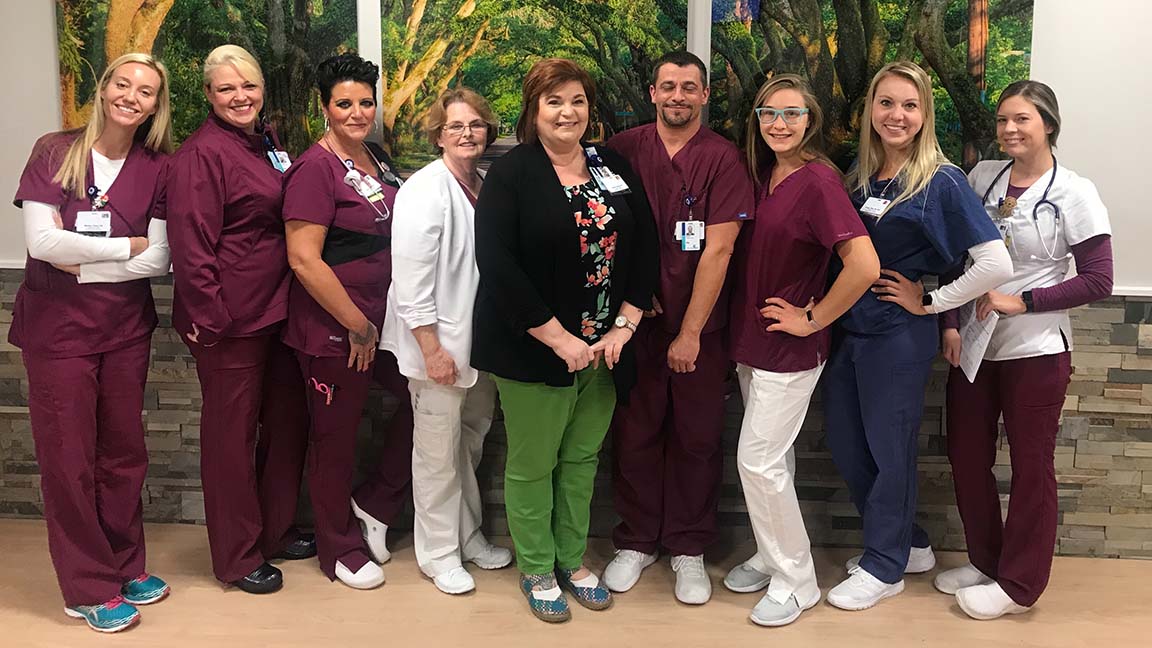 Editor’s note: Dawn Bryant, a senior communications strategist with Tidelands Health, evacuated to Aiken and was reporting from there.
AIKEN | The call came about 7 a.m. Tuesday as powerful Hurricane Florence churned off the Carolinas coast.
Less than 24 hours after learning Tidelands Health would face the unprecedented step of evacuating patients ahead of the storm, Jonella Davis, clinical director on 3 East at Tidelands Waccamaw Community Hospital, got her assignment: Round up 10 nurses to head to Aiken Regional Medical Centers with 22 patients who would be evacuated and taken there.
Jonella didn’t hesitate. Neither did any of the nurses called to go – in fact, some volunteered. With just a couple of hours’ notice, they packed a bag, left their homes and drove four to five hours in evacuation traffic so they could provide high-quality, compassionate care here just like they do back home.
“I love people, I love patients, and I love the community,” Tidelands Health nurse Nancy McCorkle said while working in the Aiken hospital Thursday, her seventh consecutive day of work. “I love taking care of people. I wanted to make sure everybody was taken care of.”
The nurses understand that demands for urgent health care don’t end just because a storm is approaching. Despite the uncertainties the storm brings, the nurses are staying positive and focused, even as they wonder what’s happening to their homes, friends and family back at the beach. 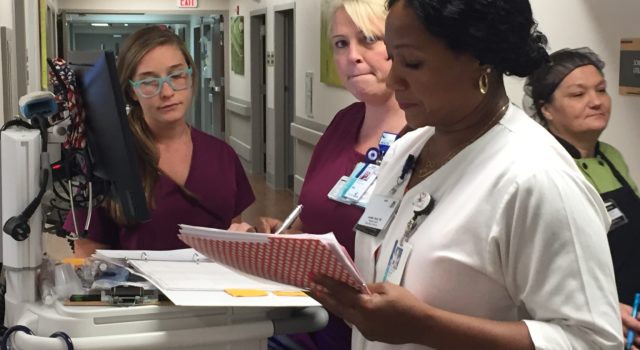 “I’m anxious about my home, but I can’t keep that as a focus because there are four patients who need me right now,” Haley Hunter said as she stood at a nurse’s station on the second floor of Aiken Regional writing patient updates on paper – records that she typically logs via computer. “That’s why we do what we do as nurses. It’s not an option. You just do it.”
Until this storm, Tidelands Health had never evacuated patients to other areas because of a hurricane. The threat from Hurricane Florence – which at times has been a powerful Category 4 storm as it swirled in the Atlantic Ocean – prompted Gov. Henry McMaster to issue medical evacuations for hospitals along the South Carolina coast, including Tidelands Waccamaw Community Hospital and Tidelands Georgetown Memorial Hospital. About 100 Tidelands Health patients were transferred to hospitals in outside the storm’s path, including Aiken Regional Medical Centers and Greenville Memorial Hospital, among others.
Tidelands Health nurses evacuated with patients to Aiken Regional, Greenville Memorial and Carolinas Health System in Florence.
Back at home, the health system temporarily suspended emergency care from Friday afternoon until 10 a.m. on Saturday
Coordinating the logistics of the move was no easy task — getting rooms for patients, lining up nurses, learning systems at a different hospital and handing off patient information to the doctors who would take over their care. And Jonella’s cell phone has been going off non-stop with questions.
“It’s just been all hands on deck,” Jonella said by phone as she stood in an Aiken drug store buying drops to soothe her tired eyes Wednesday night after getting all the patients moved into their rooms at Aiken Regional. “It’s kind of been a whirlwind since about 2 o’clock today.”
The South Carolina Hospital Association helped coordinate the rooms in inland hospitals to accommodate the evacuated patients. In Aiken, a newly renovated rehabilitation unit has temporarily become a “Tidelands Waccamaw wing” of sorts, as the Aiken hospital was able to cluster all the evacuated patients in the same area on the second floor, with the nurses sleeping nearby in empty rooms.
The Tidelands team worked closely with the hospitals accepting the evacuated patients to streamline care as much as possible. In Aiken, Tidelands Health nurses had to get ID badges, undergo the required respiratory fit test, learn Aiken’s systems and get used to the paperwork instead of inputting records in the computer. Even the tones for bed alarms are a bit different, another new system the nurses have quickly adjusted to.
“Anywhere new is hard and different and stressful, and you are away from home,” Nancy said. “The Aiken Regional staff members here have been exceptional. They have helped us so much and been very accommodating.”
All the uncertainties have been the biggest challenges.
“Just like Florence has been dancing out there in the ocean, we’ve been dancing right along with her,” Jonella said.

Local resident Janice Shaw arrived at Aiken Regional about 15 minutes before the medical vehicle transporting her relative from Tidelands Health.
Janice was impressed seeing a line of nurses outside the hospital ready to move all the patients in. Then she spotted the nurse who had been caring for her family member in Murrells Inlet, which immediately helped make an unprecedented situation just a bit better.
“He recognized a face – that is comforting,” Janice said. “It makes a tremendous difference. It’s very comforting having a nurse coming in from the same area to be there for the patients.”
Linda Parsons, a patient at Tidelands Waccamaw Community Hospital, was shocked when she learned she would have to be evacuated ahead of Hurricane Florence. She’d been through her share of hurricanes when she lived in Florida and was ready to withstand this one.
“We are not afraid of hurricanes,” she said, lying in her new hospital room at Aiken Regional.
The transport wasn’t an easy one for Linda. After the long ride, she arrived in Aiken and saw the faces of the nurses who had provided such compassionate care for her at home – bringing an instant relief during a difficult situation, she said.
“Having the staff come over is a brilliant idea,” her husband Blair Parsons said, sitting in a chair beside his wife’s hospital bed. “I feel sorry for them having to leave their families, but for the mental state of the patients, it makes a difference.”
Helene Coval, a nurse who volunteered to make the trip to Aiken, said the patients have appreciated the continuity of care seeing the same faces in both hospitals.
“They have a lot of comfort knowing there were nurses at the hospital who followed them here to provide good care,” she said.

After working 12-hour shifts to care for the patients, most of the nurses are staying in rooms on the second floor of the hospital where their patients are while keeping an eye on what’s happening 190 miles away at home.
“It is a sacrifice, but we know as nurses it goes along with the territory,” Jonella said. “We all do what we need to do.”
The Tidelands team members are keeping an eye on weather reports after their shift and checking in with friends and relatives back at the beach when they can.
Some relatives evacuated along with the nurses, staying in nearby hotel rooms. Melissa Xhani and her family were trying to decide whether to evacuate to Florida or Charlotte when she got the call to go to Aiken. Working a night shift, it’s difficult for her to sleep during the day in a small hotel room with her two young kids, but she’s making it work.
“They are sacrificing to make sure our community is well taken care of,” said Bessie Brown, clinical director on 2 East at Tidelands Waccamaw who made the trip to Aiken.
The nurses are taking it in stride, staying focused on the task of providing high-quality care like they always do – just in a different setting. They chuckle at doing paperwork the “olden way” on paper instead of a computer and laugh at themselves for forgetting things as they packed so quickly and scurried from the beach.
That doesn’t take away the anxiety, though, of what’s happening at home. But none of them can imagine being anywhere but here.
“It’s our calling, right?” Helene said.