COVID-19 survivor, 37, hopes others learn from her experience

COVID-19 survivor, 37, hopes others learn from her experience 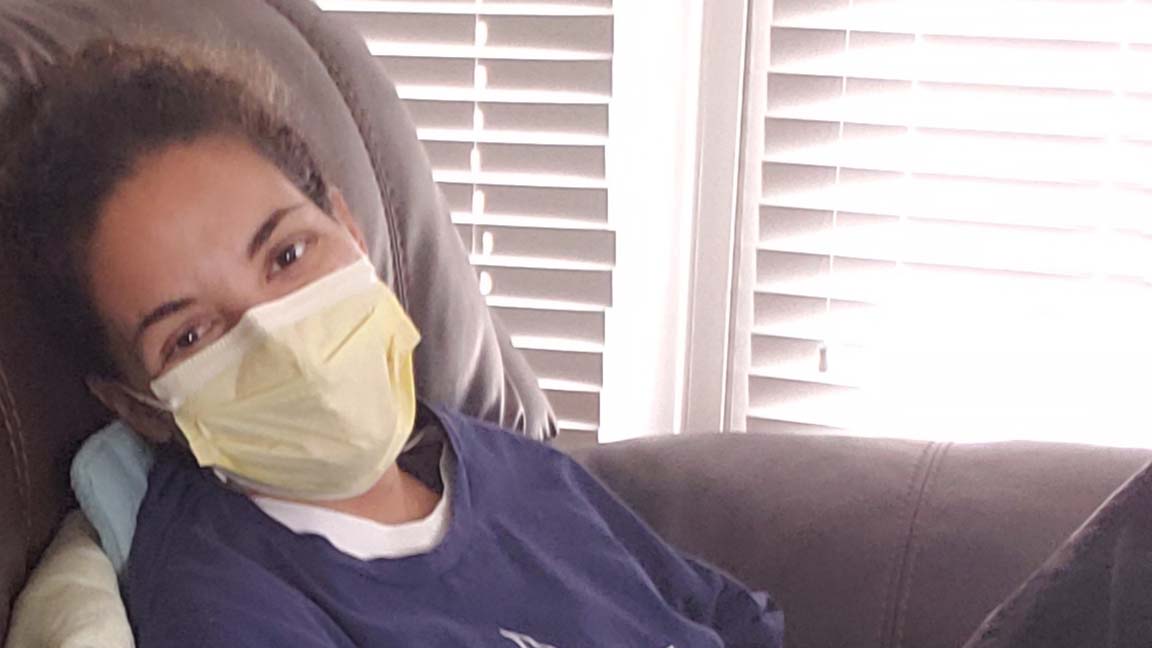 Myrtle Beach resident Gina Trotter, 37, who is continuing to recover from a near-fatal COVID-19 infection, says she hopes others learn from her experience and take the illness seriously.

Gina Trotter found comfort in knowing her life was in the hands of her colleagues.
Athletic and only 37 years old, Trotter hadn’t considered herself to be at high risk for serious complications from COVID-19. Before becoming infected with the illness, the Myrtle Beach resident ran three miles several times a week and enjoyed strength training. Her only known risk factor is high blood pressure, which affects nearly half of American adults.
“I took COVID-19 seriously, but I didn’t think if I got it, it would affect me like this,” Trotter says. “It was a huge eye opener for me.”

A sore throat was the first sign of trouble, followed by fatigue, body aches and fever.
It was April 8, and her symptoms prompted Trotter to stay home rather than head to work as a physical therapist assistant at Tidelands Health Rehabilitation Hospital at Murrells Inlet, an affiliate of Encompass Health. The rehabilitation hospital is located inside Tidelands Waccamaw Community Hospital, and team members from both hospitals work closely together.
At first, Trotter thought she had the flu. But she began feeling, in her words, “worse and worse.”
“So I had my husband bring me to the ER at Tidelands Waccamaw,” Trotter says. 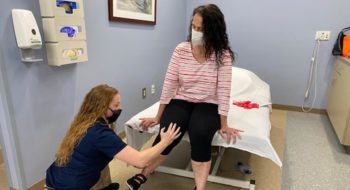 Rehab a source of strength for breast cancer survivor

END_OF_DOCUMENT_TOKEN_TO_BE_REPLACED

In alignment with the comprehensive COVID-19 safety protocols at Tidelands Health, Trotter was given a face mask upon arrival, kept separate from other patients and brought to a specially designated room for care.
By then, her condition had continued to deteriorate. The sore throat sharpened into something akin to strep throat, and she began to experience difficulty breathing.
Even after testing confirmed she had COVID-19, Trotter wasn’t especially alarmed. She suspects she was infected by a relative who later tested positive for the illness. Although she works in a hospital setting, she had not cared for any patients who tested positive for the virus and is not believed to have been exposed at work.
“I felt a sense of trust the staff knew what they were doing,” Trotter says. “It was just easy for me to be there and let them do what they needed to do, and I understand why they needed to do what they did.”

Soon after being admitted to the hospital, Trotter was placed on supplemental oxygen and transferred to the critical care unit.
“By the next morning, she had significant oxygen needs,” says Dr. Desmond Young, a pulmonary and critical care specialist and one of several physicians who led Trotter’s care. “She was on what we call high-flow oxygen therapy.” 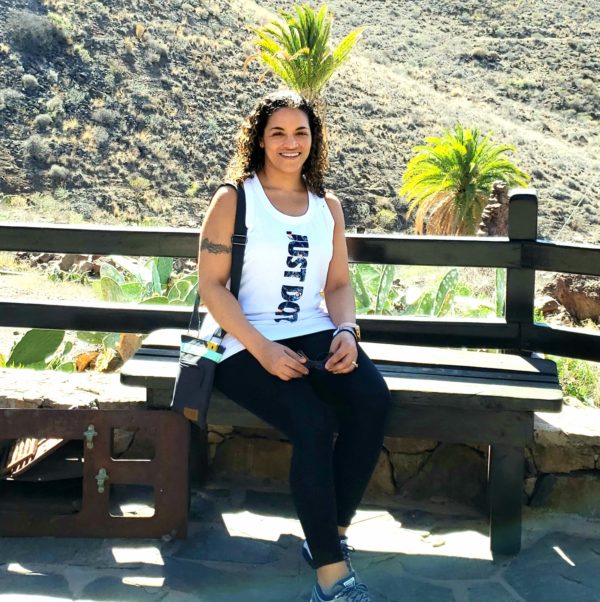 Caroline Crater, a registered nurse in the critical care unit, wasn’t scheduled to work the day Trotter was brought into the unit, but she came in to help. Crater, who has known Trotter for most of her six years with the health system, had been told another COVID-19-positive patient was being transferred to critical care, but didn’t realize who it was until she saw Trotter’s name when reviewing her medical record.
“That was really disheartening, but I knew she would get the best care possible,” Crater says. “When she saw me, she recognized me right away even though I was wearing personal protective equipment, and I could tell it made her feel better.”

Despite the advanced care Trotter received in the critical care unit, the oxygen levels in her blood continued to plummet. On April 10, Crater explained to Trotter that she needed to be placed in a medically induced coma and put on a mechanical ventilator to survive.
“I think she was nervous, but she seemed kind of relieved to be hearing it from someone she knew,” Crater says. “Honestly, she was so tired, I think it came as a bit of a relief.”
The team in the critical care unit knew placing Trotter on a ventilator would likely be a turning point in her care.
“It’s either going to be, ‘This is what she needs, her body is going to rest, and she’ll get better,’ ” Crater says, “or, ‘This may be the last moment she’s going to be conscious.’”

"The most I remember during that time was waking up at one point, and I didn’t know where I was or what was going on. I thought I had been kidnapped, and they were doing experiments on me."

Concern only grew when Trotter’s condition continued to worsen. Her blood pressure was dropping, and she was nearing the maximum amount of support she could receive through supplemental oxygen and a ventilator.
“At that point, we thought she might need an ECMO machine, which pumps and oxygenates a patient’s blood outside the body,” says Dr. Young. “It’s an option of last resort, and if she needed it, there was a small window where she would stable enough to transfer her to a facility that could offer it to her. She was rapidly deteriorating.”
As the region’s MUSC Health affiliate, Tidelands Health has a strong partnership with the academic medical center, one of the few health systems to offer ECMO therapy in South Carolina. Dr. Young arranged for Trotter to be transferred to MUSC, where she remained intubated for nine days.
“The most I remember during that time was waking up at one point, and I didn’t know where I was or what was going on,” Trotter says. “I thought I had been kidnapped, and they were doing experiments on me.
“Everyone was wearing PPE, so all I could see were eyeballs.”

Fortunately, Trotter’s condition improved without the need for ECMO therapy, and she was taken off ventilator support on April 20. She remembers feeling the pangs of hunger for the first time, which prompted her to realize she had been relying on a feeding tube for nutrition.
“I didn’t really realize how weak I was or the seriousness of everything I went through,” she says. “It was like I went to sleep, I wasn’t feeling well, I woke up, and I’m stuck in this bed.”
On April 22, Trotter was transferred back to Tidelands Waccamaw, where she received continued care to support her recovery, including occupational, physical and speech therapy to help her swallow food. She had lost 25 pounds of mostly muscle while hospitalized for the illness.
“Eating initially was very slow, and I could only tolerate a few bites at each meal,” she says. “My sense of taste was also affected – everything tasted different, even water.”
By then, she had learned from her husband about the tremendous support she and her family had received. An online fundraiser started by friends raised more than $15,000, far exceeding its $10,000 goal. Loved ones showed support on social media by using the hashtag #GinaStrong, and people donated gift cards, food and more to help her husband and stepdaughter at home.
“I was brought to tears with the amount of support people showed,” she says. “It was overwhelming.”

On April 24 – more than two weeks after she was first admitted to the hospital — Trotter was discharged from Tidelands Waccamaw to the cheers of hospital staff, who gathered at the hospital’s entrance to see her off. Though her strength and conditioning have continued to improve, she still struggles with fatigue, difficulty breathing and a recurring cough.
“It’s definitely going to be a process to get back to 100 percent,” she says. “I want to go back to work. I want to start running again.
“I’ve always been self-motivated; it’s hard for me to just lay down and let life give me what it’s going to give me. I keep pushing forward, and I think that’s helping me in my recovery.”
Hopefully, she says, people will learn from her story and take COVID-19 seriously.
“A lot of people think this thing is going away, and I’m very skeptical it’s going away any time soon,” she says. “I hope people learn from my experience and realize how serious this can be even to an otherwise healthy person.”