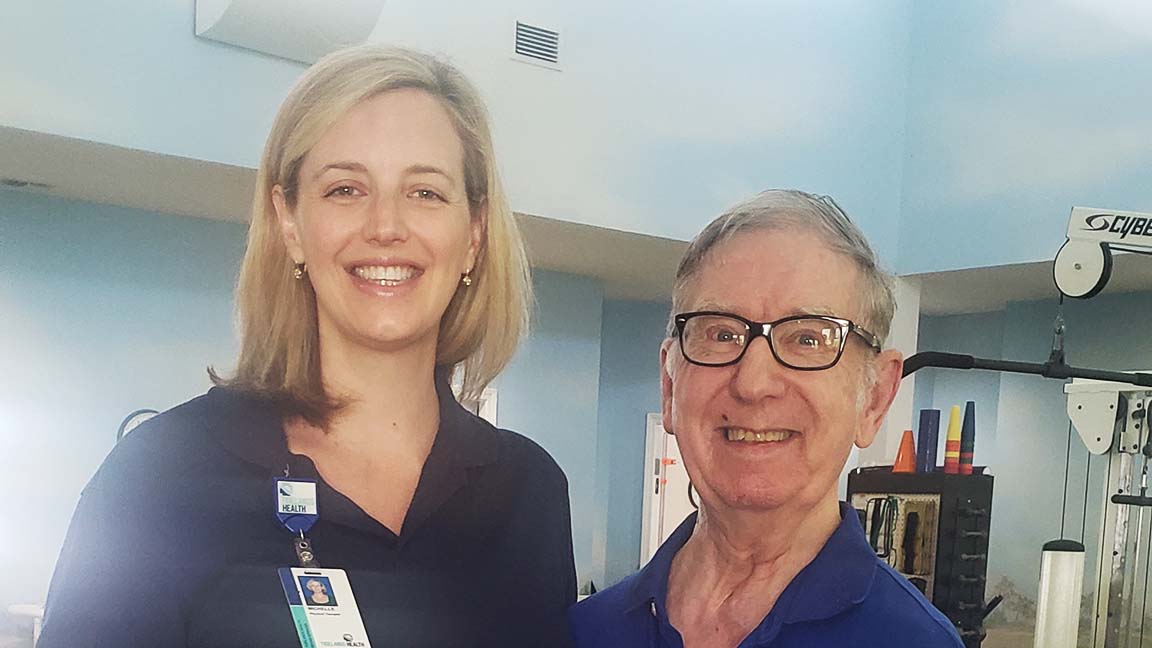 With help from Tidelands Health physical therapist Michelle Sine, William Jarvis has regained some of the movement he lost nearly 20 years ago in a serious car crash.

Nearly 20 years after William Jarvis was injured in a serious car accident, he’s still dealing with its lingering effects.
The Myrtle Beach resident was traveling on an icy bridge in 2000 in Fort Wayne, Indiana, when he lost control of his car.
“I hit some black ice,” he recalls. “My car slid into another lane and was hit by another car.”
Jarvis, 74, broke all of his ribs, suffered several crushed vertebrae and a traumatic brain injury. He spent five weeks in a coma and 18 months in the hospital.
After undergoing extensive rehabilitation, Jarvis was able to walk slowly with a cane or use a scooter, though he has continued to face challenges with balance, fatigue, an inability to bend one of his knees and lift the front of one foot.
Still, with a lot of work and commitment he was able to return to his job as a college professor. After retiring, he and his wife, Marty, moved to South Carolina four years ago, and Jarvis now devotes his time to writing books, speaking and inspiring others about the possibility of recovery from a traumatic brain injury.
Eventually, Jarvis became concerned about his mobility. The effects of his car accident coupled with a decline in strength made him prone to falling.
“I’d fallen a couple times and people had to help me up,” he says. “One time I had to call 911.”
Having to rely on others wasn’t an option for Jarvis, who decided to return to rehab with a simple, if important goal: If he fell, he wanted to be able to get up off the ground without help from anyone else.
Not only would Jarvis achieve his goal, he would exceed it. With a bit of help, he’s doing better today than he thought possible.

Jarvis was paired with Michelle Sine, a physical therapist at Tidelands Health Rehabilitation Services at Myrtle Beach, who regularly works with people seeking to regain mobility and strength.
Sine prescribed exercises for Jarvis meant to rebuild his arm and leg strength. She also gave him specific, step-by-step instructions that would help him independently get off the floor using either furniture or his cane for support. 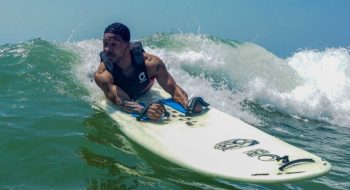 END_OF_DOCUMENT_TOKEN_TO_BE_REPLACED

“A lot of people with stroke or TBI (traumatic brain injury) have difficulty processing multiple directions at a time,” she says. “That’s why it’s important to break things down into smaller pieces.”
The two met regularly for three months. Jarvis worked on increasing his arm and leg strength through squats, arm pulls using bands and other exercises.
He appreciated how Sine broke down into steps how to get up independently and how to best overcome the lingering effects of his accident. He has more limitations on his right side than his left, which Sine took into account when determining what he should do.
Explaining the process, he says, “I roll on to my left side, I push myself up to my knees, then I put my right foot on the floor and I use a table, chair or my cane to get up,” he says.

As his muscle strength grew, he found himself able to move in ways he couldn’t before. With increased upper body strength, he was able to press his hands on the floor to get to his knees, an important step for getting up, and one he hadn’t been able to do before working with Sine.
She was impressed by Jarvis’ commitment to his goal.
“It’s inspiring that he’s been willing to do the work,” she says. “A lot of people might’ve just said, ‘Oh, that’s just the way it is.’”
Indeed, Sine says people often assume the loss of strength or flexibility is a natural part of the aging process that can’t be counteracted. As Jarvis has proven, it’s possible to become stronger and more flexible no matter your age or prior injuries.

One of Jarvis’ hobbies is practicing magic, which he says helped prepare him for relearning how to get up. Both activities require him to think methodically in steps.
“With magic tricks, you have to prepare, you have to tell a story, practice and perform the trick,” he says.
Throughout his rehab, Jarvis monitored his progress closely.
“I’m always working on my goals and tracking what I’m doing,” he says.
Since undergoing rehab with Sine, Jarvis says he is better able to bend his knees.
“I used to walk peg-legged,” he says. “But now I can bend my knee more when I walk. I’m walking better than I was before.”
Still, there’s no magic to recovering, even decades later, from a challenging injury. Jarvis says it takes work, perseverance and a positive attitude.
“I have a strong faith and I believe things are going to be OK,” he says. 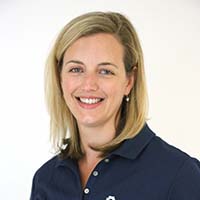