A meal ordered from 2,300 miles away lifts spirits in wake of mass shooting in Las Vegas

A meal ordered from 2,300 miles away lifts spirits in wake of mass shooting in Las Vegas 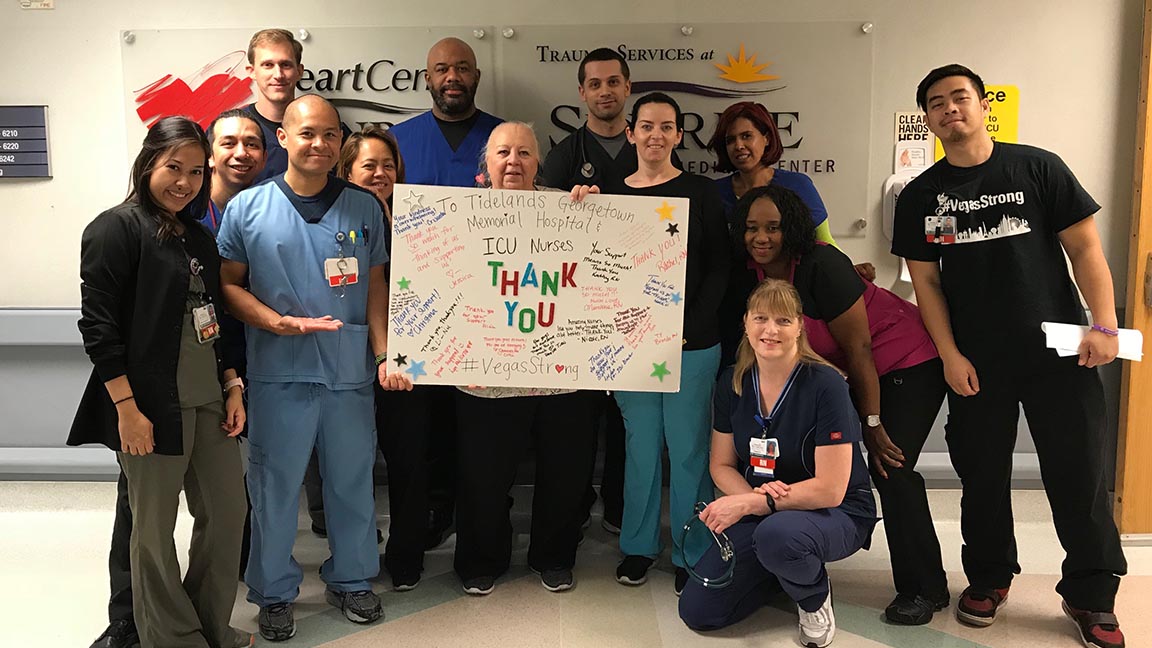 The idea blossomed from a simple conversation.

A few days after the Oct. 1 mass shooting in Las Vegas, nurses in the critical care unit at Tidelands Georgetown Memorial Hospital were talking about the strain the incident must be placing on their counterparts in Nevada. They decided to do something to show their support.

“We just wanted to reach out and let them know we were thinking of them,” said Catherine Gray, clinical director of the critical care unit at Tidelands Georgetown. “Responding to major tragedies like the shooting in Las Vegas can be difficult, both physically and emotionally, and we wanted to do something to help pick up their spirits.”

The team in the critical care unit at Tidelands Georgetown decided to raise money to buy a meal for their counterparts at Sunrise Hospital & Medical Center, which cared for 199 victims of the shooting.

The goal was to provide the hospital’s intensive care unit staff with food from Olive Garden, but the budget was tight.

Fortunately, a local Olive Garden in Las Vegas stepped up to help. After speaking with Denise Elliott, a nurse in the critical care unit at Tidelands Georgetown, the restaurant’s manager agreed to waive the restaurant’s delivery fee and absorb a portion of the cost.

“The team at the Olive Garden was wonderful from the very beginning,” Gray said. “The manager agreed to help immediately.”

The food was delivered on Thursday. In addition to Olive Garden’s renowned breadsticks and salad, the meal included chicken parmigiana with a side of spaghetti, five-cheese ziti, iced tea and mini desserts.

Critical care nurses in the trauma and neuro ICUs of Sunrise Hospital sent their thanks to Tidelands Georgetown, 2300 miles away, saying to those caregivers, “Thanks for thinking of us!”

Gray said the team at Tidelands Georgetown was excited to hear the food was well received.

“Even though our two hospitals are so far apart, we share a common bond and purpose,” Gray said. “Sometimes little things like a warm meal can make a big difference.”

123 Views
Tags
Caregivers Family
Sign me up for email updates