Parkinson’s patients punch back with fitness

Parkinson’s patients punch back with fitness 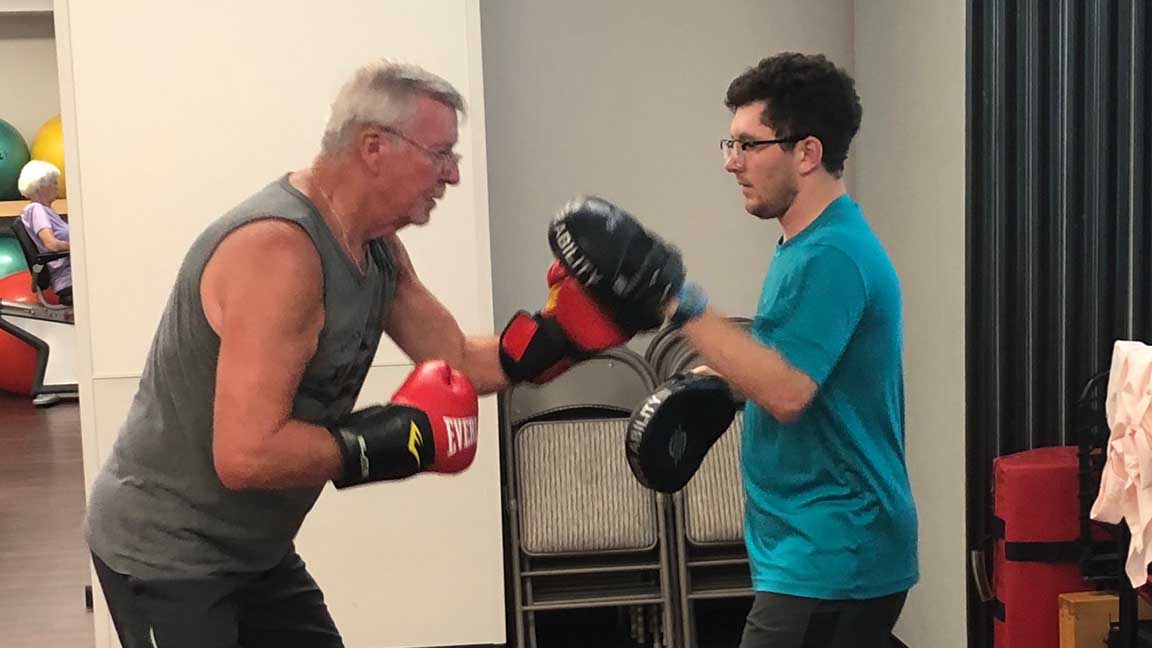 George Brockhausen works out during the "Power Through Parkinson's" class at Tidelands HealthPoint.

George Brockhausen teaches the same message to his grandchildren that he gave to his own kids.
If you’ve thrown a punch, you’ve already lost.
Still, when it comes to his Parkinson’s diagnosis, Brockhausen isn’t holding back.
The retired computer programmer and Pawleys Island resident is a member of the recently formed “Power Through Parkinson’s” class at Tidelands HealthPoint Center for Health and Fitness, our region’s only medical fitness facility. The goal of the class is to help combat the symptoms of Parkinson’s using boxing and other forms of movement.
“It beats the daylights out of you. It makes you feel like you worked out, which is good,” Brockhausen says of the class. “Too often people treat you like you’re made out of crystal because you have Parkinson’s. And you’re not made out of crystal.”

Certainly, Brockhausen likes to prove he is anything but.
During a recent class, he put his 6-foot-1 frame to use, taking turns at various workout stations featuring a heavy bag, a speed bag and strike pads attached to the hands of intern Jacob Welker, who at times got more than he was prepared for. Also featured in the class are stationary bikes, floor ladders and low-weight squats.

The program encourages variation in movements for patients who are at different stages of Parkinson’s.
“We have a lot of people who weren’t necessarily as active before. We have some people who weren’t active at all. Now they’re becoming active on a regular basis,” says Michelle Dowd, an exercise physiologist who helps teach the program. “We’ve had some people who were involved in a workout program and were members of Tidelands HealthPoint, but there were gaps in what they were doing to preserve their balance and motor function. Now, they’re addressing that with the class and getting the added intensity they were looking for.”
The once-a-week program, which is open to the general public, has grown from four people in the very first class in May to the current capacity of nine patients.

"Often, after people are diagnosed, they’re feeling down or depressed. When they join the class, they’re with a group of people that is going through the same thing they’re going through. You get to see the changes in their attitude, as well as their movement - physical and mental changes."

The growth has been a welcome sight for Dowd, who started the program in the spring with fellow instructor Lisa Kitzmiller. Dowd, a 2012 University of New England graduate, began working at a medically inspired gym in Maine that was involved in Parkinson’s studies.
Over time, those studies and others have shown just how much activity can mean to extending the capabilities of Parkinson’s patients, she says. What’s more, the classes can help improve a patient’s attitude and mood.
“Often, after people are diagnosed, they’re feeling down or depressed,” Dowd says. “When they join the class, they’re with a group of people that is going through the same thing they’re going through. You get to see the changes in their attitude, as well as their movement – physical and mental changes.
“A big part of that is the social aspect. They get to share stories and talk and help each other. What works for one person may work for somebody else who hasn’t thought of that.”

All of that has helped the program increase in popularity. Tidelands HealthPoint is finalizing plans to add another class, and Dowd says more classes may get added over time.
No matter how many more join the docket, Brockhausen intends to sign up for all of them. Frankly, he was already seeing results after just a handful of times donning the gloves.
“You find out what you can do. More importantly, you find out what you can’t do,” Brockhausen says. “So you figure out what you can do to compensate or correct it. It gives me more drive. I’m not going to beat it. Everybody knows you’re not going to beat it. But I can keep it at bay for a while.”

123 Views
Tags
Health Rehabilitation
Sign me up for email updates