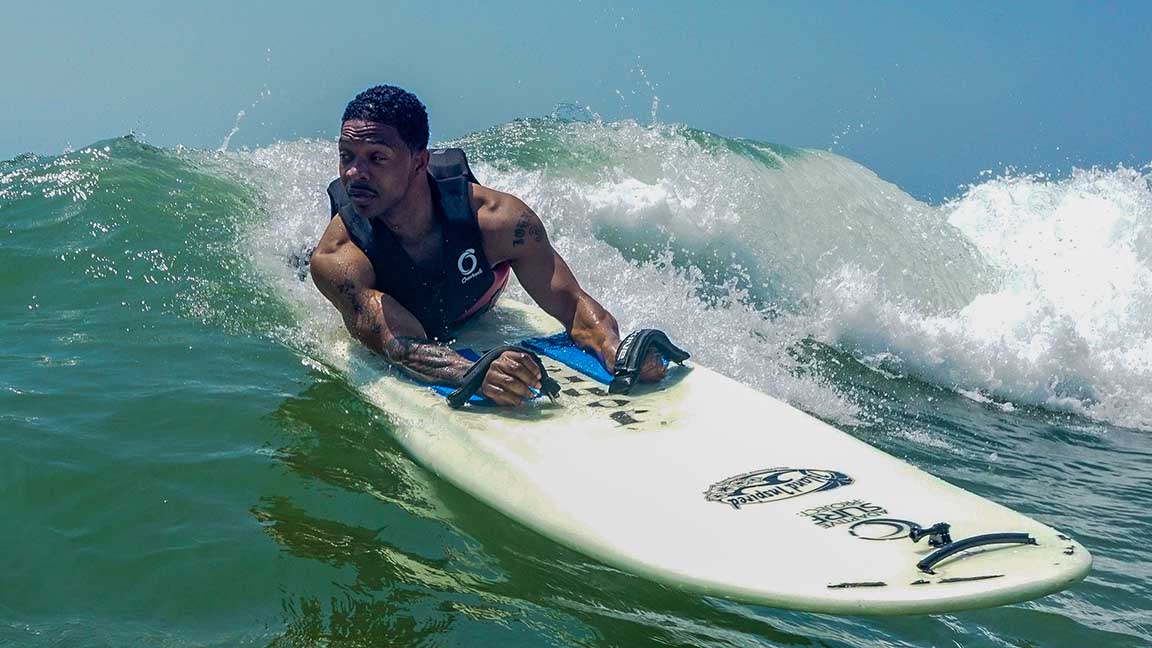 By all accounts, the first time Ernie Johnson tried to surf was an absolute disaster.
“It was terrifying. I was a big baby,” said Johnson, an administrative assistant at Tidelands Health Rehabilitation Hospital, an affiliate of Encompass Health. “I fell off my board, and I was flailing my arms like I was drowning even when there were like seven people around me.”
The second, third and fourth times in the waves didn’t go much better. Fear was getting the best of Johnson, a quadriplegic who is paralyzed from just below his upper chest and has limited limb function. He has to rely on others to propel him on a specially designed surfboard and scoop him out of the water after riding the wave. 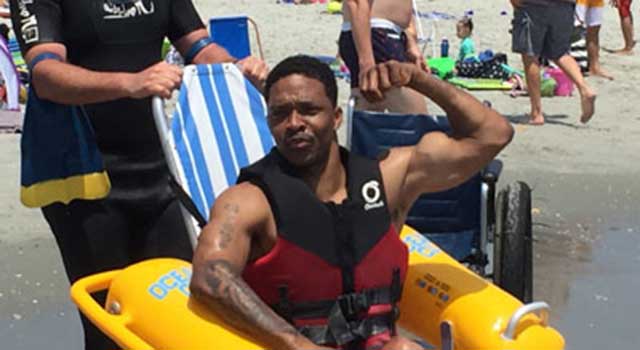 But in his natural Ernie way, he didn’t give up. A fierce competitor ever since his days of playing high school football – where a split-second tackle forever altered his life – Johnson was determined to overcome his fear in the waves to not only surf successfully but to also dominate in adaptive surfing.
Then, after nearly a year and many outings with veteran surfers, it just clicked. He finally felt safe. Confident. Completely free in the water.
“That’s when it went from scary to being fun,” Johnson said. “My fear went away.
“It is the most freeing, exhilarating, calming thing. It’s my favorite place to be and by far my favorite thing to do.”
Now, he’s riding a wave of success. Recently crowned the East Coast Adaptive Surfing Champion in the highly competitive prone-assist division, Johnson is headed to San Diego this week with the goal of earning the title of national champion in adaptive surfing.
“I’m going out there to be first,” he said. “My goal is to win. That’s my goal for every competition.”

Johnson, 39, has always been a fierce competitor.
A natural athlete, he was a force on the football field playing for Conway High School until that kick-off return on Aug. 21, 1997. Johnson was blocking for his teammate and took a direct hit on the top of his helmet, causing his fourth vertebrae to “explode,” as Johnson puts it.
The injury left him paralyzed from just below his upper chest and dependent on a wheelchair. He has nerve damage that affects all four of his limbs, classifying him as a quadriplegic. His injury is in the same spot that affected actor Christopher Reeve, but Johnson’s injury was “incomplete,” meaning he still has some feeling or movement below the spot of the injury. Reeve suffered a complete injury, leaving him with no movement. 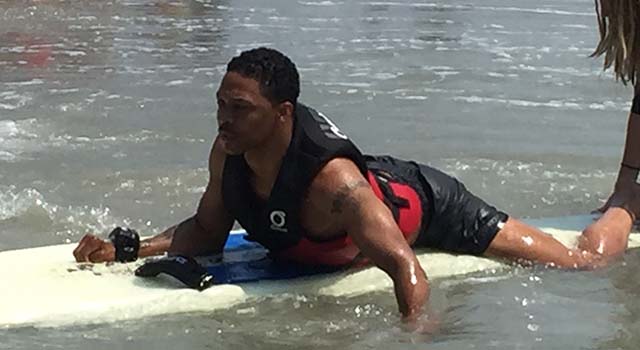 Like his approach to everything else in life, Johnson faced his new normal with a positive attitude, fueled by love and support of those close to him and the community. Conway rallied around Johnson, who never went a day recovering at the Medical University of South Carolina without several visitors. A few months later, Conway declared Nov. 16 Ernie Johnson Day.
“My family, my friends and my community – I had so much support when my accident happened,” he said. “I’ve just always had tons of reassurance.”
The accident took away some of his physical capabilities, but it didn’t affect his competitive spirit and contagious positivity. It’s rare you run into Johnson without his trademark wide smile. And he’s not shy about handing out hugs.
Johnson works at Tidelands Health Rehabilitation Hospital, an affiliate of Encompass Health, which has locations in Murrells Inlet and in Little River. Officially, he’s an administrative assistant, but his contributions go way beyond that job description.
“His positivity is contagious,” said Carey Swanson, CEO of Tidelands Health Rehabilitation Hospital, and Johnson’s boss. “It’s hard to be in a bad mood around him.” 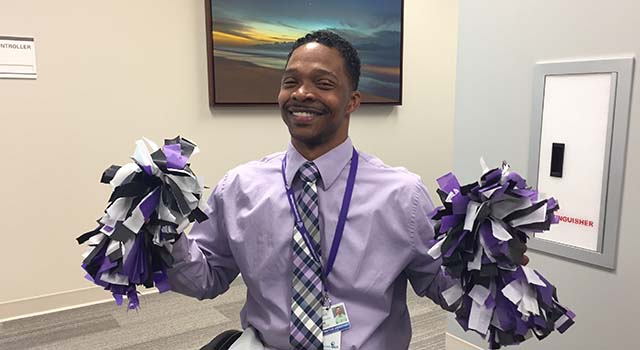 In addition to keeping his co-workers positive and laughing, he connects with patients in a way others can’t. He shares his personal journey, offering hope and encouragement as many of them figure out their new normal. And he aspires to continue sharing his inspiring story with an even bigger audiences as a motivational speaker and has already presented in front of many local groups.
“Many of our patients are moved to tears by him,” Swanson said.
He sets a strong example not only with his positivity but also his determination to make the most of life, she said. Johnson likes to do things for himself – he loads his wheelchair into and out of the car and lives with his 150-pound Italian mastiff named Smoke.
“He doesn’t let it slow him down at all,” Swanson said. “He finds a way to do whatever he needs to do.”
He works out four to five days a week for an hour to 90 minutes each session, including lifting weights.
“The stronger I am, the easier life in a wheelchair is,” Johnson said. “I do it for functional purposes.”
But it quickly became a way to channel his competitiveness. About four years ago, he entered the world of wheelchair bodybuilding and placed in national competitions.
“It kind of sparked that competitive fire again,” he said.

Then came surfing. Johnson had never surfed, so all aspects of the sport were new to him. And that fear, too.
“I remember the look on his face – he was terrified,” said Tyler Watkins, Johnson’s surfing partner for the last few years. “He has gone from someone who was scared to a surfer who is eager to get in the water at any opportunity – for fun or competition.”
Johnson was introduced to surfing through the Adaptive Surf Project, which works with other groups to sponsor “Wheel to Surf” events along the Grand Strand. Skilled surfers volunteer to take those with disabilities in the ocean and help them ride the waves using specially equipped surfboards.
Johnson, who thrives on his independence, must rely on others to help him get in and out of the water. With the surf lapping at their feet, Watkins and other strong volunteers pluck Johnson from a beach wheelchair, which is equipped with oversized wheels to maneuver in the sand and get in shallow water. 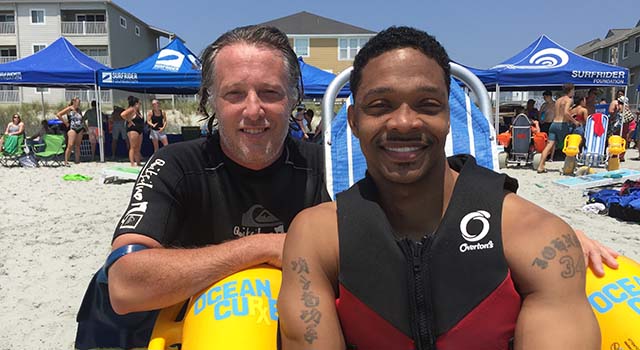 They carefully place him on the specially designed surfboard bobbing in the water. Johnson lies on his stomach, his elbows and forearms resting on pads. He grips handles near the front of the board.
Johnson and Watkins read the waves together, deciding in a matter of seconds which wave to ride. Watkins, in the water gripping the edges of the board, paddles with his fin-covered feet to gain momentum as the desired wave approaches. Then, with all his might, he propels Johnson into the wave.
Johnson takes it from there. His upper body strength gives him an edge as he maneuvers through the water, moving with an ease that often prompts applause from beachgoers and awards from judges.
Earlier this month, he earned the title of 2019 East Coast Adaptive Surfing Champion during the competition in North Myrtle Beach.

“That was a big moment,” Watkins said. “I tear up thinking about it. We worked hard for this.”
Though they make it look effortless, Watkins and Johnson spend hours in the water preparing, squeezing in surf sessions before work, after work and any time they can. Johnson learned how to read waves and is always working to try new techniques such as the “floater” he debuted during the adaptive surfing competition when he won the title.
“It was gutsy to try that move in competition when you know you had to make it work,” Watkins said.
A few days before the competition, Johnson casually mentioned to Swanson that she should swing by the beach to see him surf.
“I didn’t even know until I got there it was for the East Coast championship,” said Swanson, who recorded video of Johnson being announced as the winner. “He doesn’t tell a lot of people.”
Swanson marvels at how Johnson surfs, with his eye level with the waves. But she isn’t surprised by his success.
“He’s competitive. He’s athletic,” she said. “Ernie is just a determined guy. Whatever you put in front him, he’s going to overcome it. He makes it look easy, but it’s not easy. And he doesn’t tell you how hard he works.”
While they work for hours on the waves, sometimes Johnson and Watkins simply spend time in the ocean, connecting with the environment and talking about life.
“It allows him to be free. He forgets everything else in the water. He’s not handicapped in the water, in his mind,” Watkins said.

Newly crowned East Coast champion, Johnson is finding a new wave of support to reach his surfing dreams.
Just like community members supported him after his life-changing accident, they once again are rallying around him to help him succeed. Co-workers scribbled well-wishes on a banner before Johnson left this week for the national competition in California.
“I’ve been spoiled with love and support my entire life,” he said. “However, the love and support I’ve received from my family, my friends, my co-workers and my community this time around has brought me to tears.”

A GoFundMe page met the goal of raising $2,000 for him to buy a specially designed beach wheelchair in just 41 hours. And Surf Dreams Foundation arranged to get a new custom surfboard for Johnson that arrived just days before this week’s national competition in San Diego.
Now, Johnson has his sights set even higher – he wants to compete in the 2024 Paralympics. Supporters say that the man whose webpage is Iamtheimpossible.com can achieve whatever he sets his mind to do.
“The sky is literally the limit for Ernie and what he can achieve surfing,” Watkins said. “He can do this.”