The screening that saved his life

The screening that saved his life 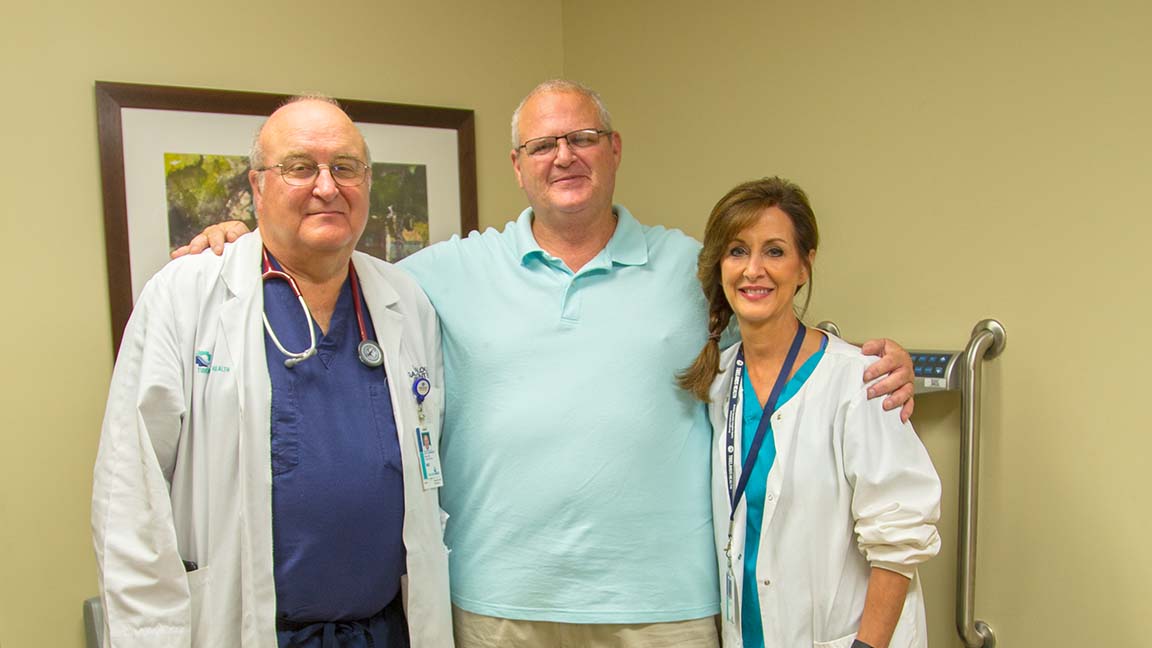 Hal James remembers the night seven years ago when a relative rushed to the emergency department in pain. Doctors discovered she had colon cancer.
“She got a bad case of it – stage 4,” James said. “I thought, ‘Wow, she is younger than I am.’”
It was devastating news for a family that was all too familiar with colorectal cancer – James’ aunt and uncle had already undergone treatment for it. With yet another diagnosis in the family, his mother urged James to get a colonoscopy, a screening that provides visualization of the colon that a doctor can examine for abnormalities.
But James felt fine. He was only 48, didn’t have any symptoms and wasn’t eager to go through the procedure. And he doesn’t like needles – they’d need to insert an IV.
James’ mother was persistent, though, and he reluctantly complied. He figured he’d get the screening, it would come back fine and he’d keep trucking along as usual.
“They had to talk him into it,” said Dana Waninger, a licensed practical nurse at Tidelands Health Gastroenterology at Georgetown, where James was a patient. “It’s a good thing they did.”

The colonoscopy revealed a diagnosis he didn’t expect – he had colon cancer. He would need surgery to remove eight inches of his colon.
“Yeah, it was a shock,” James said. “I went in on a Monday for the screening, and on Thursday I got the diagnosis.”
That screening likely saved his life. Like James, many people who have early stages of colorectal cancer don’t have any symptoms, such as changes in bowel habits or blood in the stool. That’s what makes the screenings so important. The earlier you catch the disease – before it spreads outside the colon or rectum – the easier it is to treat.
By the time you start experiencing symptoms, the colorectal cancer may have already spread.
James begrudgingly had that first colonoscopy – the preparations the day before the procedure were the worst part, he said, but now couldn’t be more thankful that he did. 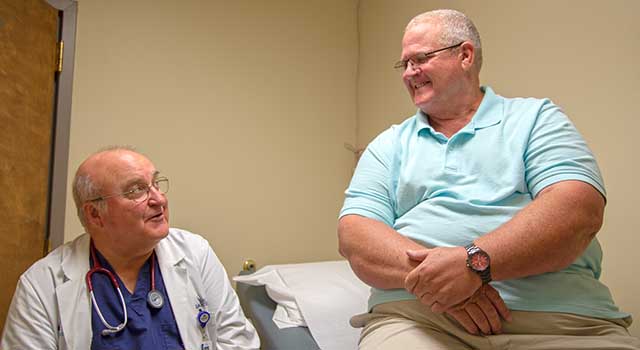 Hal James and Dr. Laurence Ballou chat inside a room at Tidelands Health Gastroenterology at Georgetown.

“This is the reason he is alive and healthy,” said Dr. Laurence Ballou, James’ physician at Tidelands Health Gastroenterology. “It is always gratifying when what you find leads to a good result.”
Nearly one in three people who develop colorectal cancer have relatives who have had the disease, according to the American Cancer Society. If a parent, sibling or child had it, you’re more at risk of getting it, too.
Your risk increases further if a relative was diagnosed when he or she was younger than 45 – James’ relative was right at that age when she was diagnosed. Have more than one close relative with the cancer – another strike against James – and your chances of developing it increase even more.
“Family history is something we pay attention to,” Dr. Ballou said.
Colorectal cancer risk increases with age, which is why experts suggest most people start getting regular colonoscopies by age 50. The American Cancer recently dropped its suggested starting age to 45.
But folks like James with a family history of colorectal cancer should start their screenings earlier – 10 years before the age when the relative was diagnosed, Dr. Ballou said.
For example, if a relative was diagnosed with colorectal cancer when he or she was 45 years old, immediate family members should start screenings at age 35.
After seeing how James benefitted from the colonoscopy in 2011, some of his other relatives scheduled their own screenings.
“My other cousins went and got checked,” James said. “They decided they’d go.”
Other, less invasive screenings for colorectal cancer have popped up in recent years that test stool samples – you’ve probably seen the ads on TV.
“There’s no substitute for a colonoscopy,” Waninger said.
James has heard the excuses for not getting a colonoscopy – it’s invasive, embarrassing or simply not needed. He encourages folks to remember what’s at stake – your life and health.
“It’s nothing to it,” James said.
The worst part of the experience for him was the preparation the day before the procedure, which includes fasting and emptying your colon. Still, that brief discomfort is worth it – better than what you go through if the cancer isn’t caught early, he said.
Now 55, James feels great. He’s had follow-up colonoscopies in 2013 and 2016 – both showed no signs of the cancer returning.
James – who years ago resisted getting that first colonoscopy – now is quick to endorse colorectal cancer screenings; he might even hand you a small royal blue ribbon sticker, which aims to bring awareness to the disease.
And just like he inspired other relatives after his first colonoscopy, he’ll make sure his two kids – a 28-year-old daughter and 22-year-old son – get the same screening that saved his life when the time comes.
“We are probably going to start encouraging her shortly,” James said.