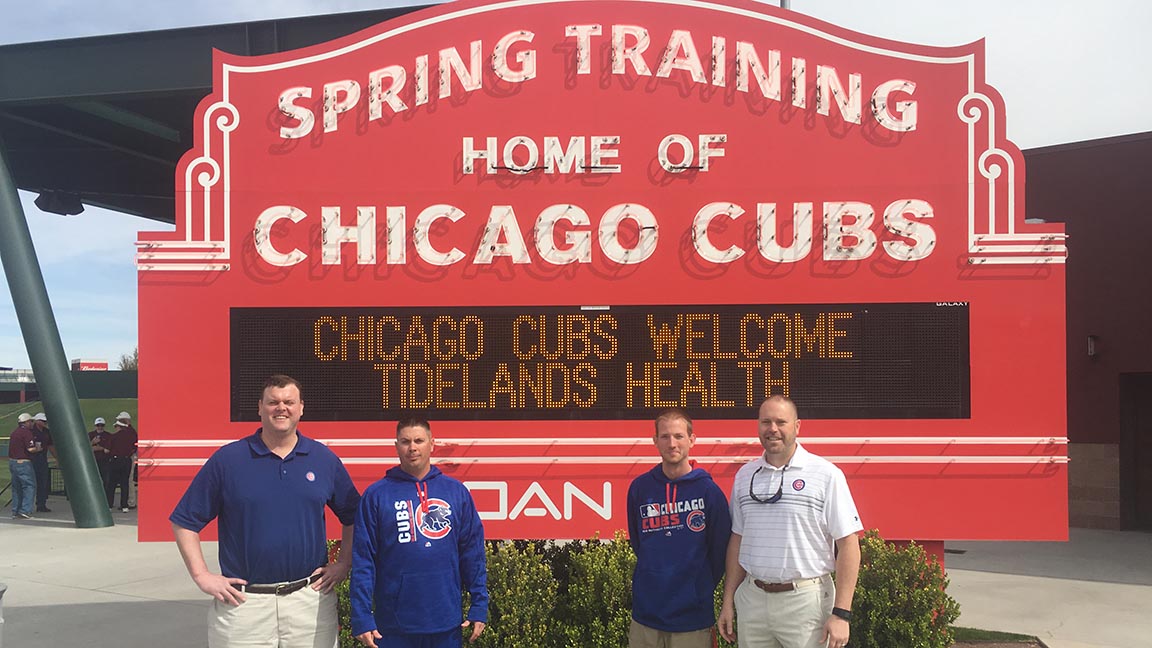 The two Tidelands Health physicians spent the weekend at the Chicago Cubs’ spring training facility in Mesa, Arizona. It was the second year the two doctors were invited to participate in the preseason medical evaluations of the organization’s minor-league players, including those of the Cubs’ Class A-Advanced affiliate, the Myrtle Beach Pelicans.

“Spring training is an incredible experience,” said Dr. Greer, an orthopedic surgeon with subspecialty training in sports medicine at Tidelands Health Orthopedics. “There’s a lot of excitement – everyone is gearing up for the start of the season.”

“The anticipation this year is heightened by expectations,” Dr. Swartz said. The Pelicans will be seeking their third consecutive Carolina League Championship. Meanwhile, the Cubs will be defending their World Series title.

“Spring training is a lot of fun, but it is also a very important time for players,” said Dr. Swartz, who specializes in family and sports medicine at Tidelands Health Family Medicine at Pawleys Island. “There’s a lot of camaraderie, but there’s a lot of competition, too, because players are battling for roster spots.”

The Pelicans’ first game is an exhibition game at home on April 5 against the Charleston RiverDogs. The team opens the 2017 regular season on the road against the Lynchburg Hillcats and the Buies Creek Astros before returning to TicketReturn.Com Field for their home opener on April 13.

“The role of health care at spring training and throughout the season is vital,” said Ryan Moore, vice president of business development for the Pelicans. “The team relies on the expertise of its medical team to help keep players in top physical shape and to provide guidance in response to injuries.”

Drs. Greer and Swartz, supplemented by other members of the Tidelands Health Sports Medicine Institute, will be at each of the Pelicans’ 71 home games this season.

“They provide care not just for the home team but also coordinate care for the visiting clubs,” Moore said. “Our players really trust the team from Tidelands Health. That’s extremely valuable. We want our players to feel comfortable confiding in the medical staff so they can get prompt and comprehensive treatment.”

Though they aren’t making any predictions, Drs. Greer and Swartz said they are optimistic about the Pelicans’ chances this season.

“The medical team and players must be passionate about what they do given the length of the season and commitment involved,” said Dr. Greer, a former team physician for the Pittsburgh Pirates. “The success of the team over the last few years certainly makes it easy. We’re very excited about the upcoming season and the opportunity for a three-peat.”