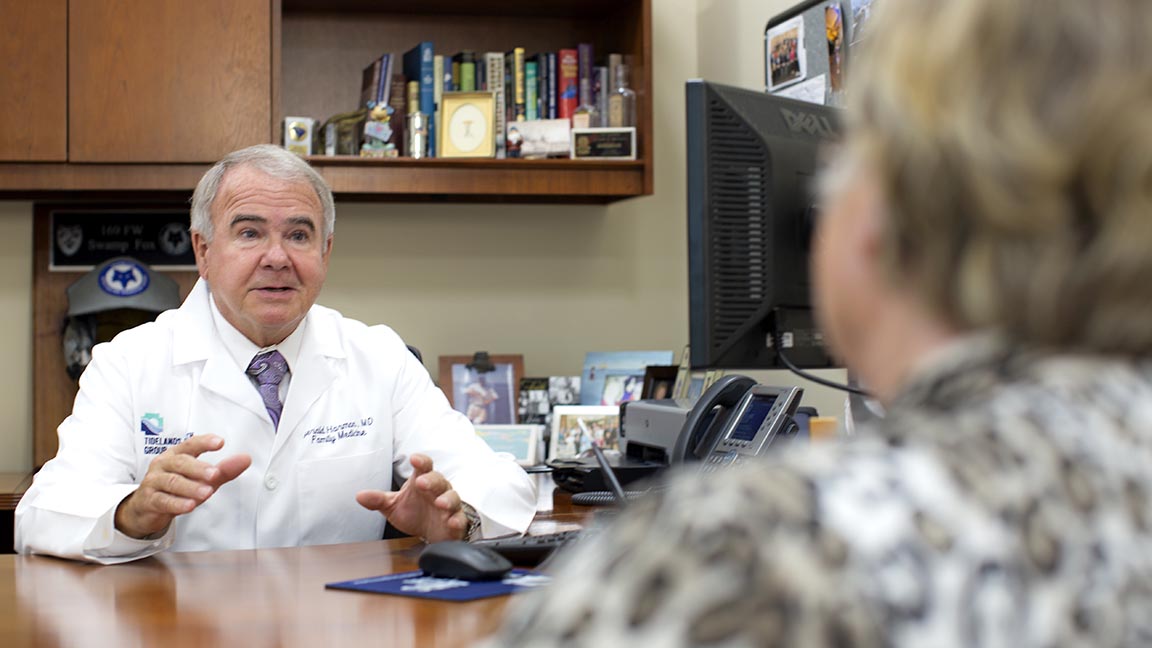 Tidelands Health family medicine physician Dr. Gerald Harmon, vice president of medical affairs for the health system, has cared for patients in Georgetown County for more than three decades. Now, he is poised to become the next president of the American Medical Association.

Stroll into Dr. Gerald Harmon’s office at Tidelands Health, and the many medals, memorabilia from his decorated military career, certificates and awards covering the walls and bookshelves are likely to catch your eye.
But tucked amid the Order of the Palmetto – South Carolina’s highest civilian honor – and a mounted military pilot helmet from his service in the U.S. Air Force are some of his most precious mementos: handmade gifts or small tokens of appreciation he’s collected from patients over the more than three decades of serving the Georgetown County community as a family medicine physician.
He’ll grab one of those gifts off the bookshelf and, without hesitation, recall who gave it to him, the year and even the kind words said when the patient presented it to him 20 or 30 years ago.
“They are gifts from the heart,” Dr. Harmon says. “Those things help carry you through.”

His dedication to his patients, seemingly neverending energy and innate ability to connect with people have made Dr. Harmon a sought-after physician along the Grand Strand, impressed his colleagues and inspired medical students for years. Now, he’ll share those special talents as president of the American Medical Association, the nation’s premier physician organization and one of the top medical associations in the country.
On Tuesday evening, Dr. Harmon took the oath as president during a virtual ceremony. In the role, Dr. Harmon is the face of the AMA and will work to help the country recover from the COVID-19 pandemic, drive the future of medicine, remove obstacles to patient care and lead the charge to prevent chronic disease and confront public health crises. He will continue in his role as vice president of medical affairs at Tidelands Health during his presidency.

In the weeks leading up to his inauguration as AMA president – in between preparing speeches, being interviewed by national news outlets and taping national public service announcements for The Ad Council – Dr. Harmon stayed true to what he loves most: taking care of patients.
He worked a 15-hour hospitalist shift on Memorial Day and continues to precept with physicians in the Tidelands Health MUSC Family Medicine Residency Program. As the health system battled COVID-19, Dr. Harmon joined other health care providers to sweat through PPE on sweltering summer days administering COVID-19 tests at drive-through events and worked 80-hour weeks caring for hospitalized COVID-19 patients.
“I think it’s fun being a doctor,” Dr. Harmon says. “One of the biggest compliments I receive is when someone asks me to be their doctor.”

Despite his rise nationally, Dr. Harmon still proudly proclaims he’s “just a country doctor.”
You’ll never hear him boast about the many accolades he’s earned through his medical and military careers, but he doesn’t hesitate to share stories about the baskets of freshly picked corn or beans patients leave in the bed of his GMC pick-up truck with a quick note of thanks for taking care of them.
“You know the great ones never have to tell you how great they are,” says Dr. Casey Mann, a physician who works with Dr. Harmon at Tidelands Health Family Medicine at Pawleys Island. 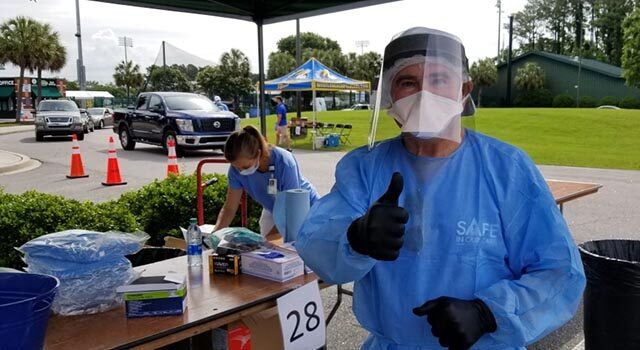 Despite his growing national profile, Dr. Harmon has stayed true to what he loves most: taking care of patients and community. Here he's pictured at a mass COVID-19 testing event held by Tidelands Health last year.

After joining Dr. Harmon’s practice in 2009, Dr. Mann quickly learned how much the community respects Dr. Harmon.
“He’s like a living legend,” Dr. Mann says. “All I had to do was tell people I worked with Dr. Harmon – instant credibility. I work with the man here.”
A Pawleys Island resident, Dr. Harmon has seen patients in the Georgetown area for more than three decades, often caring for generations of the same family.
He still goes above and beyond for patients – stopping by the office on a Saturday if needed, always being available to answer questions or making extra calls to get the best price on a medication. He doesn’t hesitate to take the extra time or put in extra energy for his patients, said Kathleen Boone, a nurse practitioner who joined Dr. Harmon’s practice in 2000.
“He just always puts the patient first, and that is super important,” Boone says. “And he puts the patient first no matter what it cost him. He’s always looking out for the patient.” 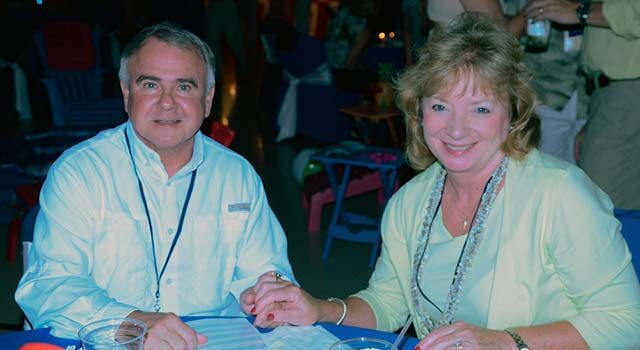 Dr. Harmon and his wife, Linda, have been married for 48 years. They have three children and eight grandchildren.

Dr. Harmon connects with his patients, always asking what they do for a living or where they grew up – questions that help him get to know the person — not just the symptoms they’re experiencing. He doesn’t want to treat the disease; he wants to treat the patient with the disease.
It’s a style other physicians have noted and try to emulate.
“Now, I don’t ever miss asking those questions,” says Dr. Sean Nguyen, a Tidelands Health family medicine physician who learned from Dr. Harmon during medical school and as a resident in the Tidelands Health MUSC Family Medicine Residency Program. “Part of being a doctor is understanding the person as a whole. I learn about the patient. That has changed my practice style tremendously. I never realized that until Dr. Harmon touched on that with me.”

From telescopes to stethoscopes

A young Gerald Harmon didn’t envision growing up to be a doctor.
His father died from cancer when he was 13 , and Harmon worked in a cotton mill for 60 cents an hour before and after school to help his family make ends meet.
He was fascinated with the stars, even making his own telescope. At the University of South Carolina, he majored in physics and mathematics with his eyes set on becoming on astrophysicist until a chance encounter with a military recruiter – or maybe it was divine intervention – led him to where he was meant to be. 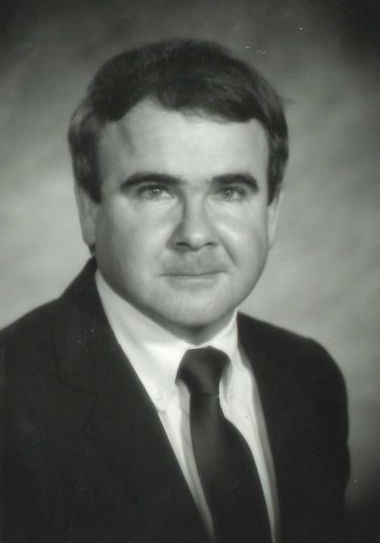 The military didn’t have much of a need for astrophysicists, the recruiter said, but doctors were needed – if Harmon was interested.
“Sure, if that’s what you want,” an eager Harmon responded.
Harmon walked away from that conversation with a new mission. After graduating from USC – he’s still a devoted Gamecocks fan and was named a Distinguished Alumnus in 2019 – he used a military scholarship to earn a medical degree from the Medical University of South Carolina and complete his residency at U.S. Air Force Regional Hospital.
“I think it was kind of the Lord’s will. Divine intervention. I guess I was called without realizing it,” Dr. Harmon says. “Our creator has a plan. I’ll always trust in the Lord’s judgment and plan.”
Dr. Harmon’s military career is equally as impressive as his medical career. A retired major general, Dr. Harmon served more than three decades in the U.S. Air Force and the Air National Guard in roles such as chief surgeon and assistant surgeon general. During Operation Iraqi Freedom, he treated U.S. military personnel, enemy combatants and locals as a hospital commander. He also served in Operations Desert Shield and Desert Storm.
He still loves to fly airplanes and will take his plane to Columbia every year for “Doctor of the Day” at the Statehouse. He’ll often ask a lucky resident physician to join him.

‘Do good every day’

Whether he’s flying planes or treating patients, Dr. Harmon strives for excellence every day.
“You wake up in the morning and ask for an opportunity to do good,” he says. “Give me the strength to get through the day and not mess up.”
Dr. Harmon has seemingly endless energy combined with a down-home demeanor that makes those interacting with him feel special. He made quite the first impression when Dr. Nguyen, still in medical school, met him to do rotations.
“He was a very enthusiastic person,” Dr. Nguyen recalls. “He came out guns blazing, really fired up, full of energy.”
A self-proclaimed pathological optimist, Dr. Harmon doesn’t just say that he genuinely cares about people — he shows it.

"That’s just the person he is. He has a strong moral compass. He always wants to do the right thing, and you can see that. He’s pretty amazing."

When Dr. Mann’s vehicle was flooded during a hurricane, Dr. Harmon used his truck to pull the car from the floodwaters. Then, he let Dr. Mann borrow his truck for a week until he could get a new car.
“That’s just the person he is,” Dr. Mann says. “He has a strong moral compass. He always wants to do the right thing, and you can see that. He’s pretty amazing.”
Dr. Harmon’s caring heart is one of the attributes that made his wife, Linda, fall in love with him while she was in high school. Last month, the couple celebrated their 48th wedding anniversary. They have three kids and eight grandchildren, whose artwork made with crayons and magic markers is proudly displayed on Dr. Harmon’s desk. He affectionately refers to Linda as his “enabler-in-chief,” as she’s sacrificed to allow him to miss meals, proms and other milestone family events to treat patients, serve the community and donate time to so many local, state and national organizations.
He’s been active in the AMA for more than three decades, serving in a variety of roles. Early in his career, he served as a delegate to the AMA Young Physicians Section in 1988. In 2017-2018, he served as chairman of the AMA board of trustees.
Years ago, Dr. Nguyen accepted Dr. Harmon’s invitation to join him at the AMA’s annual convention in Chicago, and it gave the young physician a glimpse at the respect and influence Dr. Harmon has on a national level.
“It was like walking around with a celebrity,” Dr. Nguyen says.

Inspiring the next generation of physicians

If there’s one thing Dr. Harmon enjoys as much as treating patients, it’s inspiring younger physicians.
He’s a clinical professor at MUSC and the University of South Carolina School of Medicine and is a clinical faculty member at the Tidelands Health MUSC Family Medicine Residency Program.
He doesn’t just share his medical knowledge. He emphasizes the need to genuinely care about the patient and leads by example. Younger physicians have noticed him taking on extra shifts and pitching in when needed.
“He doesn’t do it for recognition,” Dr. Nguyen said. “It is his passion.” 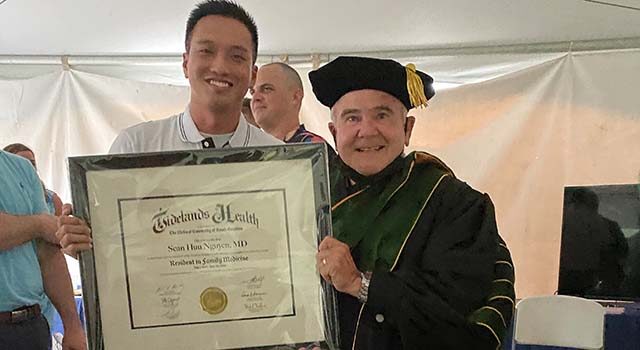 One of Dr. Harmon's greatest pleasures is helping train the next generation of physicians.

Dr. Nguyen credits Dr. Harmon with showing him the impact a family medicine physician can have on his community while also serving as an advocate for the medical profession on the state and national levels.
“That’s why I’m here today,” says Dr. Nguyen, who practices at Tidelands Health Family Medicine at The Market Common. “He makes you feel like the most important person in the room. To me, he makes me feel like I can be the best doctor ever. It is an honor to know him.”