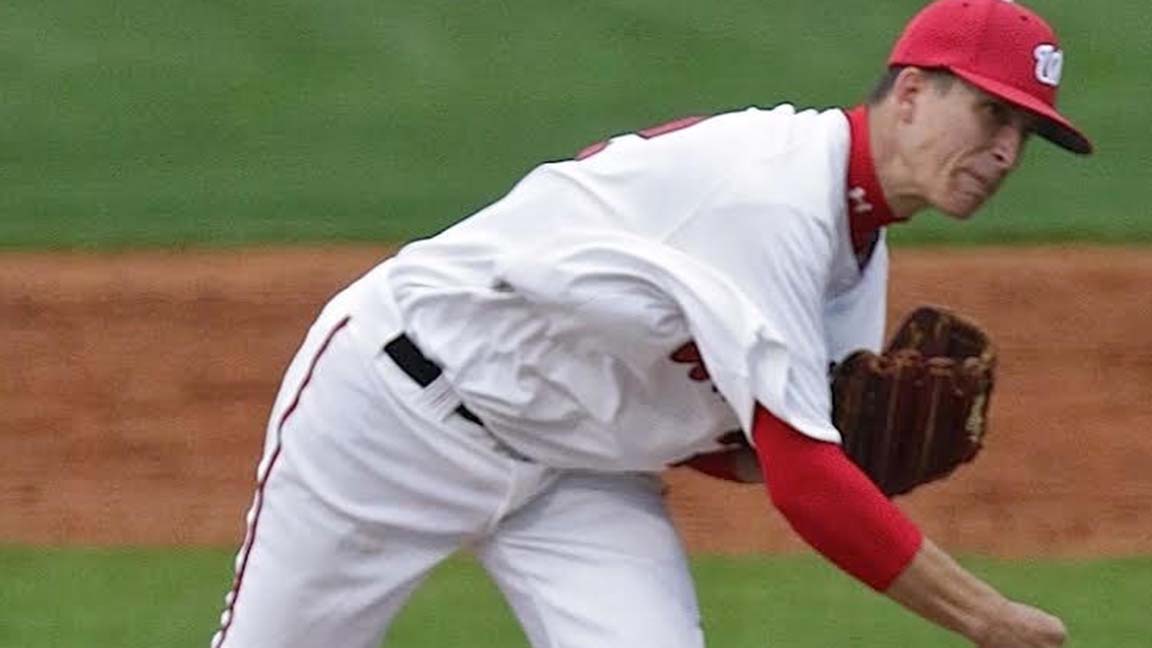 When Levi Almond takes the mound these days for his college team, the Erskine College Flying Fleet, he does so with the greatest of confidence.
He’s confident in his ability. He’s confident in the guys that line up behind him. Perhaps most importantly, the Waccamaw High School graduate is confident in his powerful right arm.
And that, he will tell you, is something that he couldn’t have said just a few months back. In fact, there were moments during the hardest times when he wondered if he’d ever play ball again.
“But today,” he says, “I’m 100 percent. I’m absolutely 100 percent.”
It’s a statement that testifies to his fighting spirit and the care he received at the hands of Dr. William Greer, a Harvard-education orthopedic surgeon who practices at Tidelands Health Orthopedics at Murrells Inlet.

Almond began seeing Dr. Greer in the summer of 2017 after suffering a throwing injury during his freshman year at Erskine. That February, Almond had been pitching when all of a sudden he experienced a sensation he describes as a “tightening” in his forearm. The pain wasn’t dramatic or severe, Almond recalls, but it was certainly enough to prevent him from playing his best.
And as the days went on, that “tightening” just lingered. 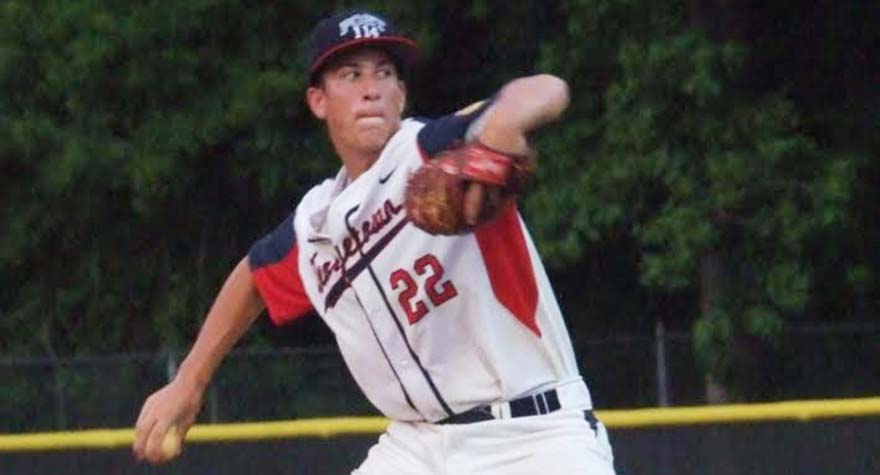 “It wouldn’t go away,” he says. “We had a game a couple of days later, and I remember being out in the outfield getting ready to throw. I tried to throw it really hard and my arm just stopped–the ball went maybe five or 10 feet. And that’s when I knew something was wrong.”
Confoundingly, however, MRIs taken at the time showed no significant injury. So Almond, working through the pain, tried everything he could to get himself back on the diamond. He worked with his team trainer on a rehab program. He tried to strengthen his forearm muscles and followed a pain management plan. He even tried cortisone shots. But none of it delivered anything but temporary relief.

The pain just kept getting worse.
“It really, really hurt,” Almond says. “I would actually scream sometimes. It could be any number of things that made it hurt. Typing on a computer would hurt. Writing would hurt. Using a mouse in class would hurt. I just knew I had to do something.”
Not knowing where else to turn, he reached out to Dr. Greer, who had treated him in the past. During their first appointment, it was clear to Dr. Greer that something was very, very wrong.
Dr. Greer is a leading member of the Tidelands Health Sports Medicine Institute, a team of clinicians with decades of experience treating high school, college and professional athletes.
He serves as a team physician for the Myrtle Beach Pelicans and, from 2006-2008, served as a team physician for the Pittsburgh Pirates.
“Levi had worsening pain that started to affect what we call activities of daily living,” Dr. Greer recalls. “He had tried extensive treatment with his trainers. He was very uncomfortable at rest and attempts at motion for routine activities such as grabbing a notebook or even raising a glass of water caused him significant discomfort and pain. I was very suspicious he had a significant injury to his elbow.”

Ultimately, Dr. Greer’s suspicions proved correct. With the pain worsening, Dr. Greer and Almond agreed the best way forward was ulnar collateral ligament reconstruction, commonly known as Tommy John surgery. During this reconstructive procedure, Dr. Greer would essentially rebuild Almond’s ailing elbow using a tendon from his left knee. The surgery, first performed in 1974, has become fairly common among baseball players, and pitchers in particular, though it does come with some risk. Almond understood that even with surgery it was possible he might not be able to pitch again. 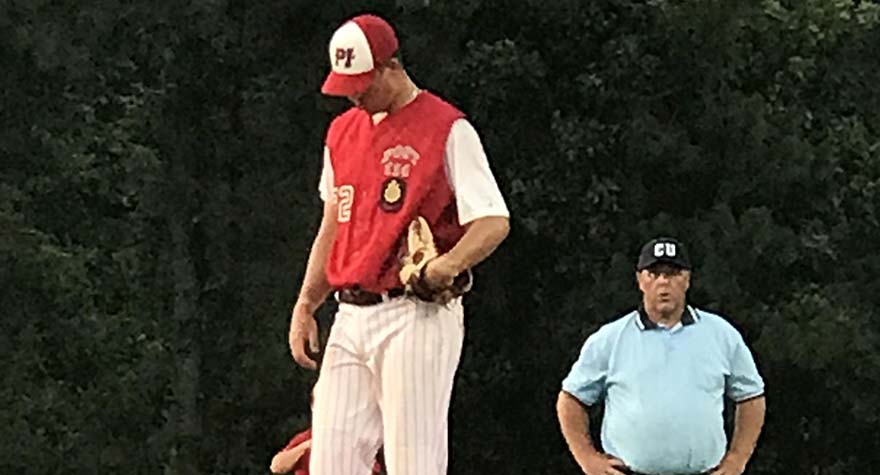 The surgery went well, but months of rehab followed. Almond worked to rebuild—basically from scratch–his arm strength. It was no small task.
“Just how weak I was, it was amazing to me,” Almond says. “I knew I basically had to start all over again, so at that point I just decided I was going to work as hard as I could.”
He recalls struggling to lift a single pound, then five pounds, then 10 and 20. When the knee from which the tendon was taken healed, he hit the gym as hard as he could and eventually he was allowed to start throwing. One day at a time he got stronger, as did his arm.

Back on the diamond

And then, eight months after surgery, he was back on the field–not as a pitcher, but rather at first base. It was there he would test his arm for the first time.
“That first game, I was a little bit scared to throw as hard as I could, but I was able to go out and play,” he says. “I think it was maybe halfway through the season when I really realized that, yeah, I could make all the throws I had to make, when I knew was able to throw as hard as I could.”
That’s also when he realized he was going to be able to pitch again. In late May of this year, Almond took the mound for the very first time since since his surgery, throwing against live hitters from his local high school. Then, just over a month later he threw his first official game at Erskine.
Nearly a year and a half after that awful “tightening up” took baseball away from him, Almond was back where he wanted to be–the pitcher’s mound–and doing what he loves best: battling batters.
“I felt great. My arm felt great,” he says. “I threw 34 pitches in three innings, and had a quick first two innings, and in the end, it wasn’t my arm that got tired. It was my legs. I just hadn’t pitched in so long, and my legs couldn’t hang in there, but I felt I could have thrown out of a chair all day.”
Simply, Almond’s recovery has been a complete one. And Dr. Greer couldn’t be happier for–or more impressed by–his client.
“He feels that he is 100 percent and I think that is remarkable,” he says. “Tommy John surgery is a daunting endeavor for both the physician and, more importantly, for the patient or athlete.
“It requires extensive physical therapy and dedication of the athlete afterward, and Levi certainly displayed his will to continue to try to play baseball. His being 100 percent is just as much attributable to his effort as it is to our surgery. These types of success stories are very important for physicians and our entire team – it’s what keeps us coming back to work.”