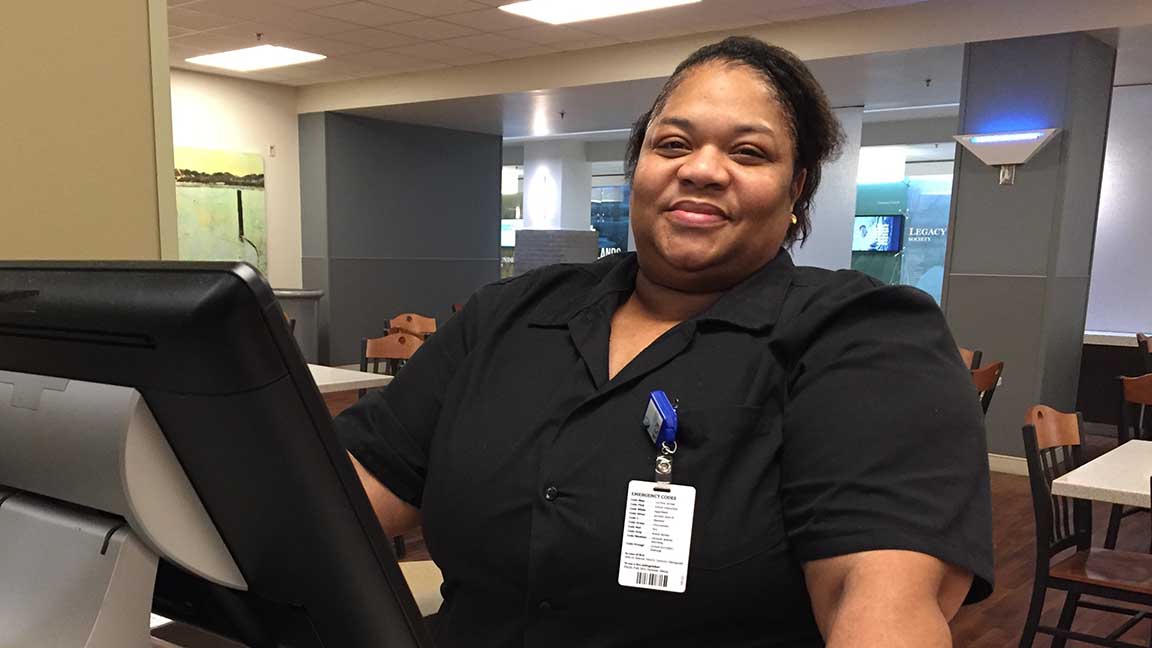 Elonda Dupree's quick response helped save a life in the cafeteria of Tidelands Georgetown Memorial Hospital.

It was going along just like any other day in the cafeteria at Tidelands Georgetown Memorial Hospital.

Elonda Dupree, in her usual spot manning the cash register, shared a laugh with a Tidelands Health employee grabbing a snack and chatted with a senior who was sitting down for a meal of shrimp fried rice after visiting a patient. Dupree, who’s worked in the cafeteria for 13 years, loves engaging with customers – making them smile or giving a hug when needed.

But on this day about a month ago, she gave so much more. In a split second, she saved a life.

“She wasn’t breathing and wasn’t talking,” Dupree remembers. “It was scary. It was really scary. The only thing I could think of was I need to do anything I could to help.”

It was just a few moments after that senior had passed through the line. Dupree was ringing up a drink for Bill Guy, the health system’s assistant director of facilities management, who noticed the woman – now sitting in the dining room – making a weird gesture.

As the woman struggled to stand, Guy blurted out, “Is she choking?”

Dupree whipped around, saw the woman in distress and rushed to help. Dupree doesn’t have any medical training, but well, she said she had to do something. A scared Dupree started the Heimlich maneuver.

“I’ve never done it before in my life, but that was just my first reaction,” Dupree says.

By this point, the woman was turning blue, Dupree says. Choking cuts off the flow of oxygen to the brain, so it’s crucial the person receives first aid as quickly as possible.

It took a few abdominal thrusts, but the woman eventually threw up – clearing her passage so she could breathe again. She would be OK.

“Elonda immediately left the register. She didn’t even think twice about it,” Guy says. “She just reacted to it — didn’t give it a second thought. She did great.”

Guy and Dupree comforted the woman, easing her back into a chair and fetching her a bottle of water. They called over a nurse who was walking by to check the woman out and make sure everything was OK.

“I just wanted to stay there until she felt comfortable and I knew everything was OK,” Guy says. “You feel like you did something positive beyond a normal day, I guess.”

Dupree’s quick reaction has earned kudos from her co-workers and Jeff Malinski, general manager of support services for Tidelands Health.

“Now you get a new job,” Malinski jokes. “You’re a first responder, in addition to cashier, cook…”

Dupree remembers running to help, but the rest is a blur.

“Lord knows my adrenaline rushed. I know it was God – somebody else jumped in my body and did it. It just didn’t feel like it was me. It happened so fast,” Dupree says. “It was scary. All I remember is running over there. Then she was better.”

The woman – who never mentioned her name  – was laughing and talking by the time she left the cafeteria that day. Dupree is grateful she could be there to help.

“It was a scary and awesome experience being able to help somebody,” she says. “I’m just glad I could be the blessing in her life that day.”