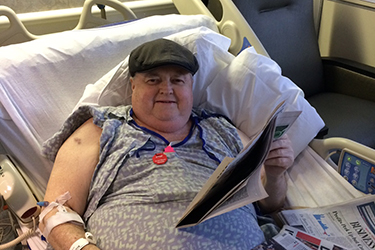 Steve Connair in his bed at Tidelands Georgetown Memorial Hospital

Steve Connair was shaking uncontrollably. The seemingly innocuous insect bite on his leg had become frightfully swollen, red and warm.

Something was very wrong.

Connair and his wife, Karen, were visiting Georgetown in late October from Annandale, Virginia as part of a tour group learning about Francis “Swamp Fox” Marion, the officer famous for pioneering guerilla military tactics during the American Revolution.SteveConnair

Steve Connair suspects he was bitten by an insect while exploring overgrown battle sites outside of Georgetown.

“We were in the woods there, that’s where I got bit,” Connair said. “I don’t know what it was. There was a lot of brush around. I had long pants on, too, and I never really felt anything.”

The bite initially caused nothing more than a small red spot by his ankle. He applied some cream before he and Karen Connair went to sleep in their hotel room. There was no apparent cause for concern. 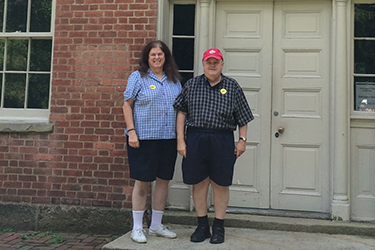 Steve and Karen Connair while visiting the region

The first hint of a problem came in the middle of the night when Karen Connair remembers her husband complaining of leg pain and general malaise. By 6 a.m., the couple realized Steve Connair needed immediate medical attention.

He was trembling, the bite was causing his leg to swell and he was feverish.

The couple headed to the emergency department at Tidelands Georgetown Memorial Hospital, where Steve Connair was promptly evaluated by medical staff and transferred to the care of Dr. Charles Duncan in the intensive care unit.

Dr. Duncan outlined a course of treatment that would rely on antibiotics to kill the infection, Steve Connair said, and clearly answered each question the couple posed.

“The doctor explained it had caused a systemic infection,” Steve Connair said. “He was very good at explaining things – what they were doing and why they were doing it.”

“I had gotten kind of weak from all of this,” he said. “When I first started walking I was pretty wobbly.”

Connair said no one ever determined what type of bite he had suffered, only that it was likely from some type of insect. The resulting infection was the first time he had faced serious medical trouble.

Throughout her husband’s treatment, Karen Connair said she felt strong support from the community and the health system’s employee partners.

She remembered James Daniels, an emergency department technician she befriended who took time at the end of his shift to find her, say goodbye and offer his best wishes to her husband. Nurses were friendly and efficient.

“They all seemed to enjoy their jobs, and this reflected in their caring attitude toward my husband,” she said. “I think they got a kick out of Steve as he wore his little Irish cap all the time in bed to keep his head warm. I enjoyed interacting with them.”

While at a local restaurant, a woman who learned of Steve’s condition bought Karen Connair lunch, she said. A clerk in a local shop gave her a hug and offered to pray for the couple.

“Everyone – from the doctors, nurses, cafeteria workers, people around town and even the guards at the front desk – was kind and friendly to me,” she said. “By the grace of God, and the excellent care that Steve received at Tidelands Health, he is now fully recovered.”