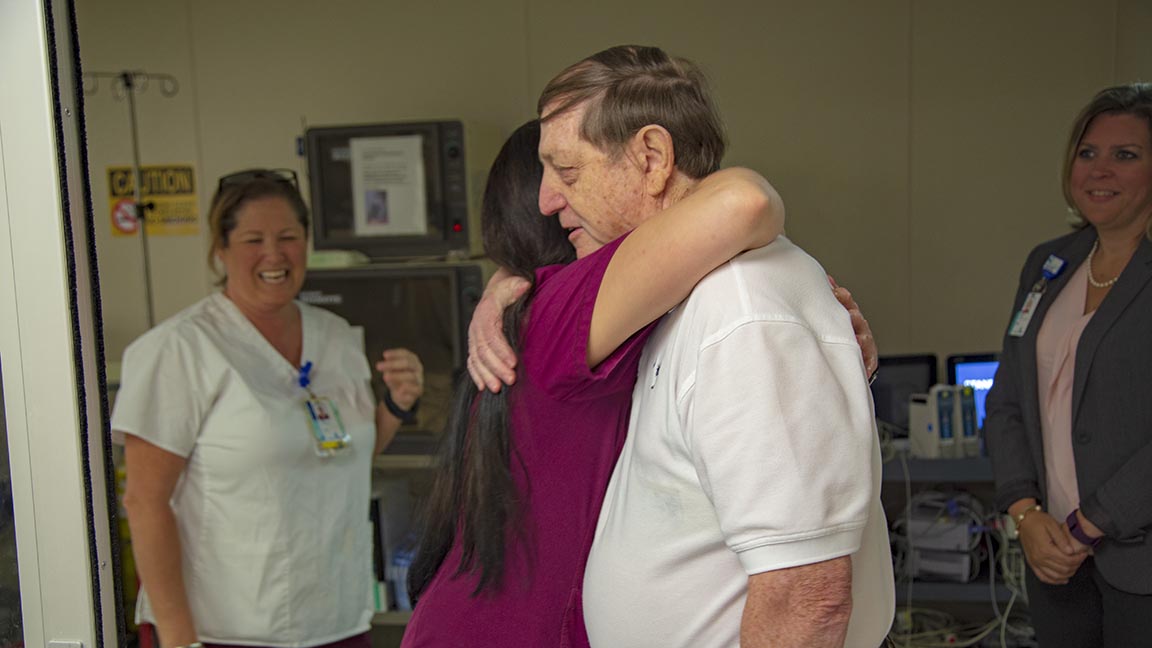 Editor’s note: If you or someone you love is experiencing chest pain or other symptoms of a heart attack, call 911 immediately. Don’t attempt to drive yourself to care. Every second counts.

Bryan England doesn’t remember much from the day he nearly lost his life.

The 72-year-old Pawleys Island resident woke up on the morning of Saturday, April 28, feeling normal. He recalls going out to lunch with a friend, feeling a bit tired and looking forward to getting some rest at home.

From there, his memory goes blank.

Piecing together what he was told by others, England learned he suffered a “widowmaker” heart attack at about 6 p.m. in the emergency department at Tidelands Georgetown Memorial Hospital. He doesn’t remember driving himself there, talking to anyone or suffering from any pain or discomfort.

What’s clear to him, however, is that he wouldn’t be alive today without the team of doctors and nurses in the emergency department that evening.

Widowmaker heart attacks earned their moniker because they are especially deadly. They involve a blockage of the left anterior descending artery, which provides a large amount of blood to the heart. Death can occur in minutes.

“The truth of the matter is this – God got me to the emergency room just in time,” says England, former dean of the Georgetown campus of Horry-Georgetown Technical College. “The doctors and the nurses, with God’s help, took over from there.” 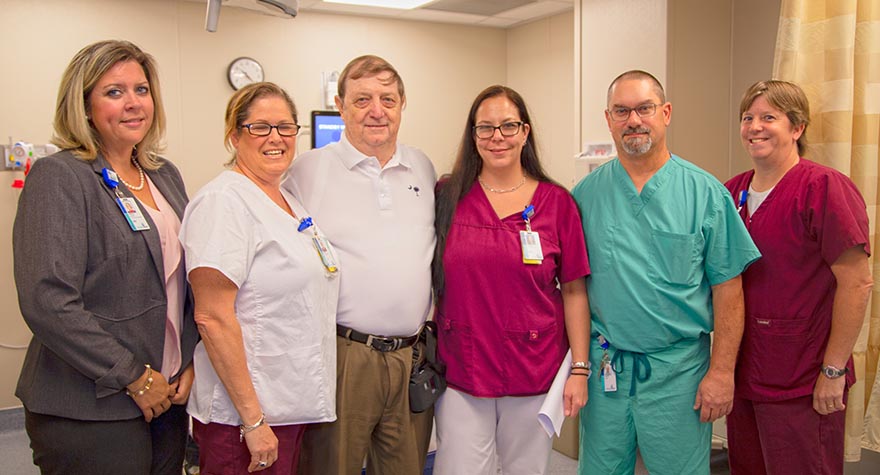 Miller was talking to England, who had complained of chest pain, when he suddenly slumped over.

“She was holding him up to stop him from falling as she was calling – she literally couldn’t grab the phone,” Kimpton says. “Hearing that scream, you knew something was wrong.”

The five-member team of nurses working in the department that night immediately got to work. They safely lowered England to the ground, lifted him onto a stretcher, began chest compressions, intubated him and administered medications they hoped would help bring him back.

The team worked to revive and stabilize England for about 20 minutes. He was later told his heart stopped twice for a total of four minutes.

“Had he not been sitting in our ER right next to someone in health care, he would not be with us today,” says Kimpton. “A lot of times when someone goes into cardiac arrest like that, you don’t get them back.” 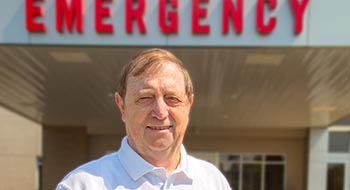 England remembers waking up on Monday, April 30, in a hospital room at Tidelands Georgetown feeling foggy and confused about why he was there. He learned he had suffered a massive heart attack, that his life had been saved in the emergency department and that two stents had been implanted to clear the blocked artery.

“I had no idea how long I would live, but I was just thankful to God for getting me to the emergency room and to the nurses and doctors who saved my life,” he says “Some people believe in guardian angels. While I do not understand it, I do believe in them – I believe my guardian angel was there with me that day.”

He remembers telling a nurse he felt cold, and she responded by warming some blankets and placing them over him.

“It was one of the best feelings I ever had,” he says. “Not only did it warm me, but it made me feel that I was not alone, that others cared and that they would do all they could to help me.”

In the days that followed, England would find himself surrounded by more love and kindness as friends, clergy, family members and other loved ones visited and showed their support. His son, Bryan, was at his side when he awoke and stayed with him every day at the hospital. Catherine, his daughter, was a regular visitor and took him home.

Nurses from the emergency department, too, stopped by, including two who had graduated from Horry-Georgetown Technical College and were part of the team that helped save his life.

“It was very satisfying to know that maybe, in some small way, I had once helped them through my work at the college, and now they had helped save my life,” England says.

Since his heart attack, England has started cardiac rehabilitation through Tidelands Health Cardiology and is feeling well. Although never a bad eater, he has taken steps to improve his diet and exercise more often, something he encourages others to do, too.

People are often so focused on work and other demands that their health becomes secondary, he says.

“Sometimes only as we get older do we realize we have to pay more attention to our health,” he says. “The sooner we do that, the better.”

It’s important to stay on the lookout for warning signs of heart trouble and to take them seriously, too, he says. A few weeks before his heart attack, he had an unusual episode of weakness and blurriness while playing golf. It passed, and he decided to wait until he saw his primary care physician for his next regular appointment to bring it up.

England says he feels blessed to be alive and that the episode has changed his life forever.

“I remember the day I woke up – I just remember feeling humble and glad I was alive,” he says. “You have all these thoughts go through your mind. It changes your perspective.”