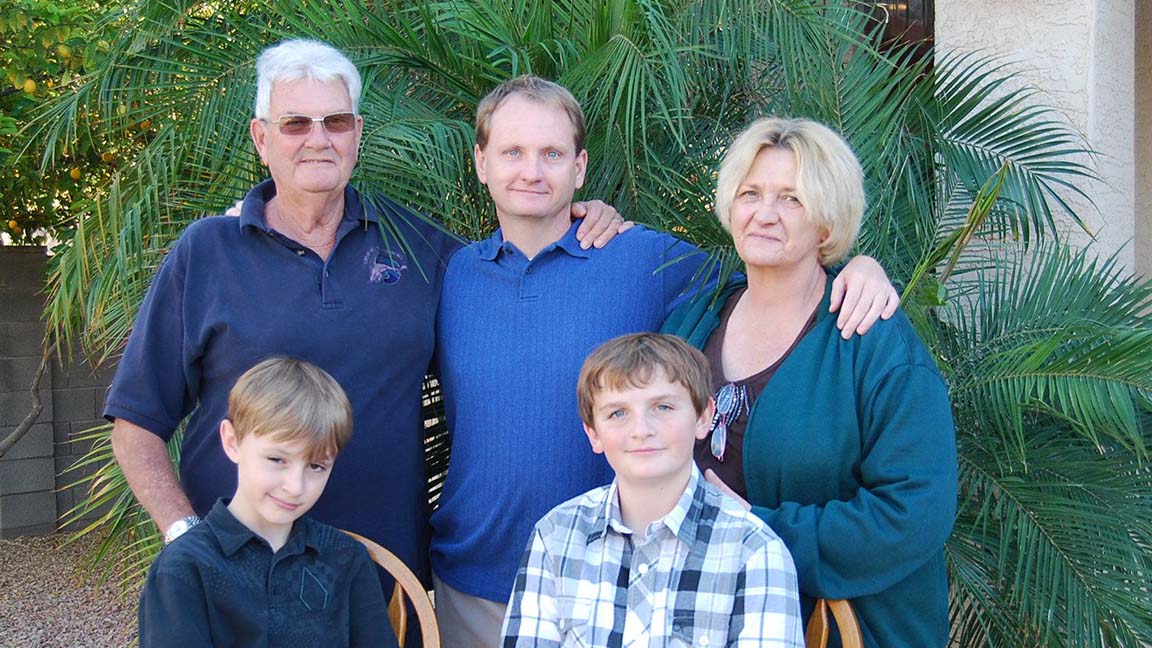 Surfside Beach resident Cecil Hensley, top left, says the help he received from his son, Shane, standing next to him, Tidelands Health team member Chris Shrader and two passersby helped save his life.

Cecil Hensley remembers falling, then darkness.
On April 27, the 82-year-old was out for a walk in his Surfside Beach neighborhood with his son, Shane, when he started to feel dizzy.
“We were just walking,” says Cecil Hensley, who served for a combined eight years in the U.S. Navy, Army and National Guard. “I just remember passing out. I remember calling Shane and falling toward the ground and putting my hand out in front of me. That’s all I remember of that.”
Only after waking up in the hospital several days later would Cecil Hensley learn he had survived a near-fatal cardiac arrest and how his son, a neighbor he’d never met and some passersby helped save his life.

A call for help

A resident of Chandler, Arizona, Shane Hensley had flown to Myrtle Beach a few days earlier to spend time with his parents and help them with chores.
After dinner, he and his dad decided to enjoy a walk in the neighborhood as they often do.
At one point, the two stopped so his father could recover from a dizzy spell – only for his dad to fall after walking about 100 feet further. At first, with his dad stuttering, Shane Hensley thought he was simply embarrassed that he’d taken a spill, but Shane quickly realized the situation was extremely serious.
As his father faded into unconsciousness, Shane Hensley rolled him onto his back, called 911 and yelled loudly for help.
“I’m a pretty quiet guy normally, but my voice carried well that day,” Shane Hensley remembers. “911 answered and asked where I was. I had no idea but looked around for street signs and spotted a young man walking a couple of dogs nearby. I asked him to take my phone and help 911 find us while I began chest compressions.”

Chris Shrader was in his messy paint clothes, his mind’s eye far from health care or his job as a patient services assistant at Tidelands Health Diabetes Center.
The 53-year-old and his wife had painted their living room the night before, and now he was focused on touching up their work.
Loud yelling from outside the house broke his concentration and prompted him to investigate. 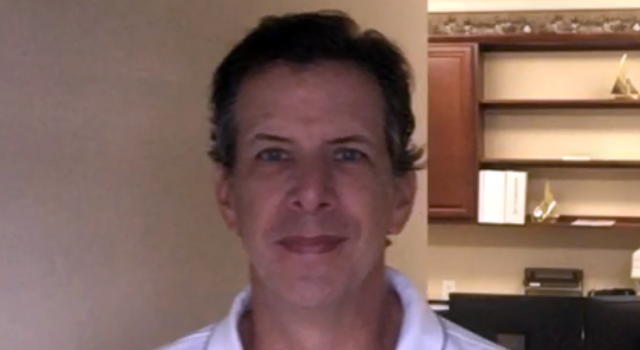 “At the time, I didn’t know if it was kids or someone just messing around,” he says. “As soon as I went out, I realized it was serious.”
In his front yard, he found Shane Hensley performing chest compressions on Cecil Hensley.
Instinctively, Shrader ran to help, his actions guided by the CPR training he completes every other year at Tidelands Health. More than 1,300 care providers at the health system, our region’s largest health care provider, hold CPR certification.
“It felt like autopilot,” he says. “It wasn’t like stop and make decisions. Everything you learn in BLS (basic life support) class kicked in.”
As Shrader approached, he quickly explained he knew CPR and took over chest compressions from Shane Hensley, who began giving his father breaths.

"At one point, his eyes rolled back in his head, and I thought it was the end. But I didn’t let up, and neither did Chris or the EMTs."

At one point, a couple driving by in a truck stopped to help, indicating they were both were experienced EMTs. The man began checking Cecil Hensley’s pulse while the woman took over chest compressions. Shrader and Shane Hensley took turns breathing for Cecil Hensley.
“Dad was going in and out,” Shane Hensley recalls. “He stopped breathing, he had no pulse and was unresponsive. At one point, his eyes rolled back in his head, and I thought it was the end. But I didn’t let up, and neither did Chris or the EMTs.”

Still, by the time an ambulance arrived, Cecil Hensley’s prospects were uncertain.
“I remember just thinking it was successful – we at least got him to the professionals,” Shrader says. “They got him to the emergency department.
“Still, there was no sign that anything positive was going to come forward. You’re optimistic by all means, but there was no indication it was going to have a good outcome.” 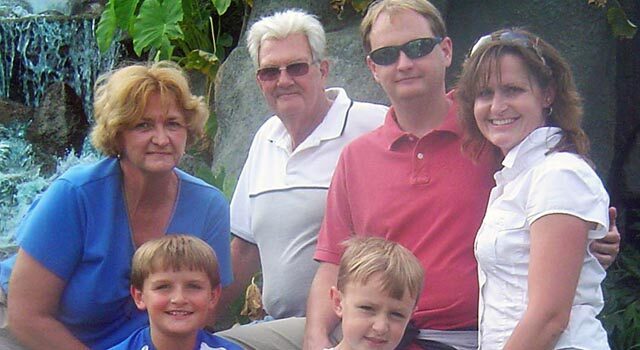 Cecil Hensley, at middle in white, is extremely grateful for the help he received after suffering a life-threatening cardiac arrest.

For Shane, the situation brought back a difficult memory from his childhood. At 16, he used CPR in an unsuccessful attempt to save the life of a neighbor who had suffered a massive heart attack.
“If you’re ever in this situation and your loved one doesn’t make it, you must understand that sometimes recovery isn’t possible, and you can’t blame yourself if you aren’t able to save them,” he says. “But brush up on your CPR, and they’ll have the absolute best chance possible. Don’t put it off – this kind of thing can happen to anyone at any age, and you may be the only chance they’ve got.”

At home, news that her husband of 53 years had collapsed on the street came as a shock to Sheila Hensley. At the time, she was unsure whether Cecil Hensley had even left the house to join Shane for a walk.
Checking a cell phone app that allows her to track her son’s location, she decided to give him a call when she noticed he had stopped for a long time on the street.
“He didn’t answer but called right back and said, ‘He’s down, Mom.’” she recalls. “He said, ‘I’m sorry, Mom, it doesn’t look good.’ He felt like it was his fault for getting Cecil out and walking.
“It was not his fault. If it had happened when Shane wasn’t here, he wouldn’t have made it. It all happened at the right time and the right place with the right people nearby.”
With Cecil Hensley en route to the hospital via ambulance, Chris Shrader followed behind with Shane. Meanwhile, Chris’s wife, Tina, stopped by the Hensley home to check on Sheila Hensley and make sure she was OK to drive herself to the hospital. 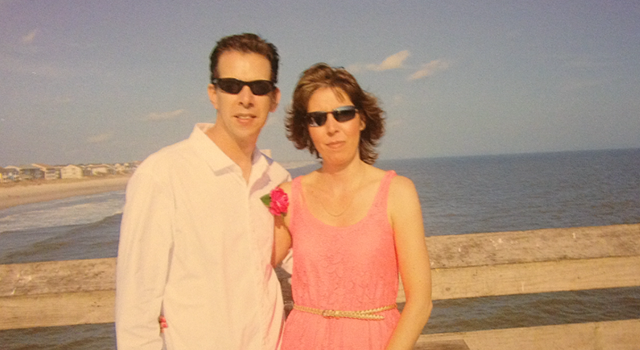 Chris Shrader and his wife, Tina.

Chris Shrader wouldn’t begin to fully process what had happened until the next day.
“The night before it was very auto pilot – it was do what you have to do,” he says. “The next day, it was very emotional. I told my boss in the morning what was going on. It was tough to talk about it without it being emotional.”

A few long hours after Cecil Hensley arrived at the hospital, his family learned he had survived, although his condition remained critical.
The days that followed were extremely difficult as Cecil Hensley began to recover from the injuries he suffered from the fall and the trauma caused by CPR, but his condition slowly improved. On day three, the family learned excellent news: Full recovery was possible with the help of a pacemaker to control Cecil Hensley’s heart rhythms. 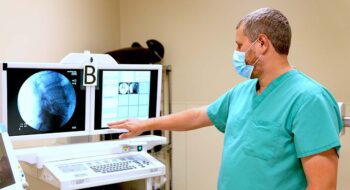 END_OF_DOCUMENT_TOKEN_TO_BE_REPLACED

Two weeks later, Cecil Hensley came home. These days, he can walk without a walker, and he’s back to helping Sheila with chores around the house. Although he doesn’t remember much from his ordeal, his memory and cognitive function otherwise remain intact despite the extended period of time he was in cardiac arrest.
It’s an outcome he says wouldn’t be possible without his son, the EMTs who stopped to help, Chris Shrader and CPR.
“I’m still here,” he says. “It’s wonderful.”