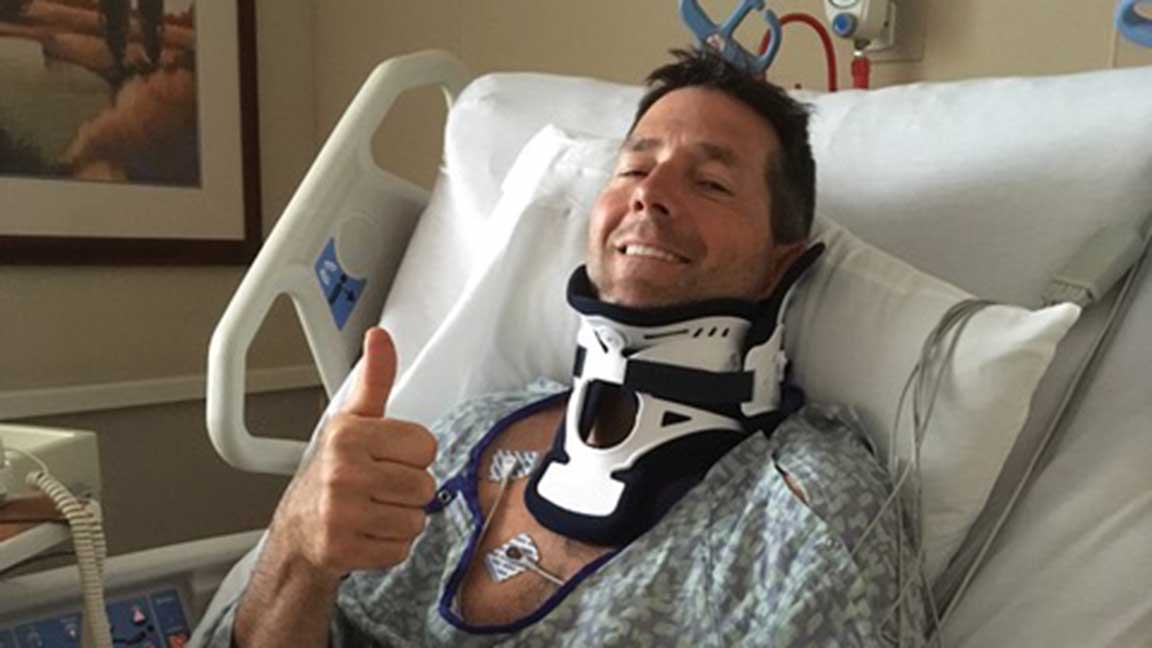 As Craig and Brenda McLeod settled in for bed at Ocean Lakes Family Campground in Myrtle Beach, a single step in the wrong direction would change more than just the course of their summer vacation.
The family had nestled into their recreational vehicle by 10 p.m., and Craig was heading to tuck the couple’s two young sons in for sleep.
A pullout bed caught his foot, trapped his arms and sent him sailing head first. It was the kind of mishap that probably couldn’t be replicated in a thousand tries.
“I did sort of a somersault and landed on top of my head,” says 46-year-old Craig, a high school environmental science teacher. “The boys laughed because my legs were up in the air, and Brenda says, ‘You boys are always messing around.’” 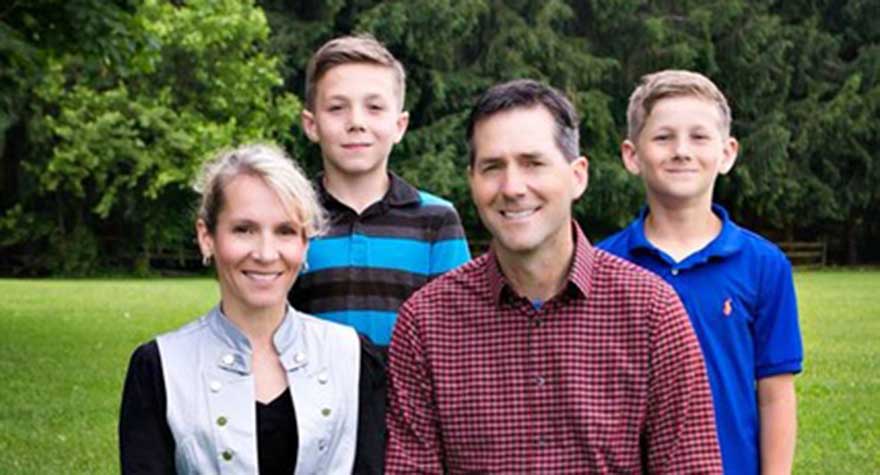 As much as he wanted to laugh it off, Craig suspected something was wrong. He heard a “pop, pop, pop” in his head as he crashed into the floor.
What he didn’t know was that was the sound of his neck breaking, and he was dangling one bad movement away from paralysis.
He paced the little aisle in the motor home to try to walk it off. Something still didn’t feel right, but it didn’t feel wrong enough for him to indulge his wife’s pleas to call 911.
He thought maybe he could sleep it off, but he could hardly move his head and sleep was interrupted by pain and worry. He was concerned that he’d at least need a chiropractor, but injury was not on their itinerary.

Everything had been going as planned on their annual vacation, the final late-summer trek before the two teachers and their boys returned to school. They’d seen the Titanic museum in Pigeon Forge, Tennessee, and they planned to head farther south and take the kids to Disney World after these few days in Myrtle Beach. They’d have some fun on wheels, then chug the RV back home to York County, Pennsylvania, and start the school year. 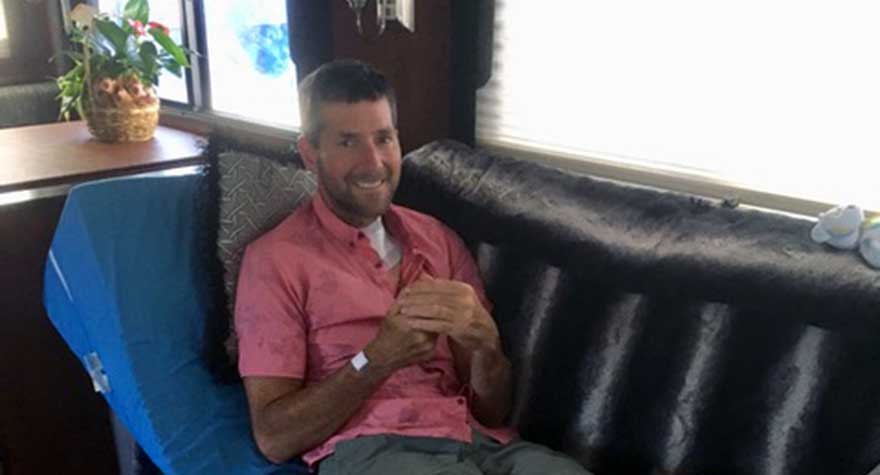 Whatever this was, Craig thought, it had to get better quickly so he could ride the Test Track and hit the Tower of Terror with the boys.
His brain never allowed him – this guy who was training for a marathon in two months – to fathom that he’d broken his neck. It was one thought he didn’t have over a restless night of Brenda’s pleas for an ambulance.
A mean August storm blew into their camp around 2:30 a.m., and Craig groaned out of bed to manually retract the trailer’s awning so the storm didn’t rip it off. He couldn’t look up far enough to see the overhead rig and had to rely on the feel of the mechanisms to grab the pole, hit the release and reel the heavy thing back in.
By morning, he was hurting and anxious for medical attention.
“I wanted to be first in line when the urgent care clinic opened at 8 a.m.,” he says.
They didn’t have a car along on the trip, so he rode his mountain bike to avoid uprooting his family in the RV.

"If he’d have fallen from his bike with his spine being that profoundly unstable, he’d be faced with permanent catastrophic injury. "

He didn’t know it, but the slightest trauma on that ride could’ve caused Craig to be paralyzed from the neck down for the rest of his life, says Dr. Scott Ellison, an experienced orthopedic surgeon who specializes in spine surgery at Tidelands Health Orthopedics at Murrells Inlet.
“If he’d have fallen from his bike with his spine being that profoundly unstable, he’d be faced with permanent catastrophic injury,” Dr. Ellison says.
Craig arrived at the urgent care clinic a full hour early and sat on a bench outside, waiting for the place to open. Brenda and the boys rolled up on their bikes around 7:45 a.m. and joined him for the visit.
“When we got the X-rays, they kinda looked at them and gave me a collar,” he says. “They said they think they want another opinion and recommended Dr. Ellison.”

Still unaware of the full scope of his injuries, Craig rode his bike back to the campground with his family before calling a taxi to take him to Tidelands Waccamaw Community Hospital.
The urgent care clinic had called Dr. Ellison, and he was fully expecting a minor injury. But he drew from instinct to order more tests, and what he saw was potentially devastating, a portrait of injury that he calls “a dreaded triad.”
“You can’t come any closer to being paralyzed than he came,” the physician says. “He fell on the crown of his head, which is a very concerning mechanism of injury. He had a fracture and a dislocation of his neck with a ruptured disc. It’s a triad of potentially catastrophic findings.”
Craig and his family struggled to absorb the news. 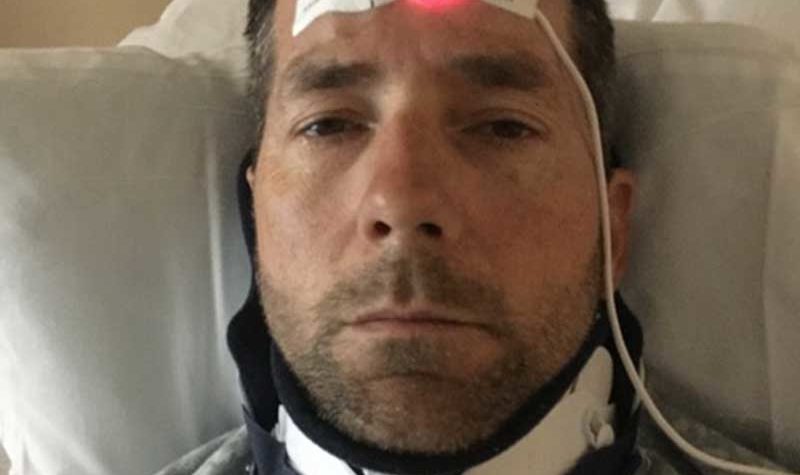 Crag McLeod, his neck in a brace, at Tidelands Waccamaw Community Hospital.

“He showed us the scan and said, ‘Look, you almost broke the spinal cord,’ and he showed us how pinched it was. It was scary.”
Craig started crying, and his wife and boys were crying. Then Dr. Ellison couldn’t force back his own tears.
“Yeah, I…it was emotional,” Dr. Ellison says. “There was just such fear, disbelief and uncertainty on their faces. The boys were crying and when they left the room, Craig says, ‘I’m supposed to be their hero.’”
Remembering the time his own father had taken him to Disney World in 1972, Dr. Ellison understood how important the trip was to the family.
Craig was admitted to the critical care unit, where he lay still until surgery could be performed the next day. Dr. Ellison pulled a team together to perform the surgery that Saturday, a day when the office is typically closed.
“Our spine team volunteered to come in that day to their tremendous credit,” Dr. Ellison says. “It was a team effort that came together to get things taken care of urgently.”
Tidelands Health neurosurgeon Dr. M. Daniel Eggart volunteered to help with the operation, as did instrument workers, ICU nurses, an anesthesia team and spine team members Melissa Cribb and Mary Lou Noon, Dr. Ellison says.
Dr. Ellison performed two successful surgeries. He entered the front of Craig’s neck to remove the ruptured disc and stabilize the neck with a graft and a plate. A second surgery to the back of Craig’s neck further stabilized his neck with rods and screws in the C6 and C7 vertebrae. 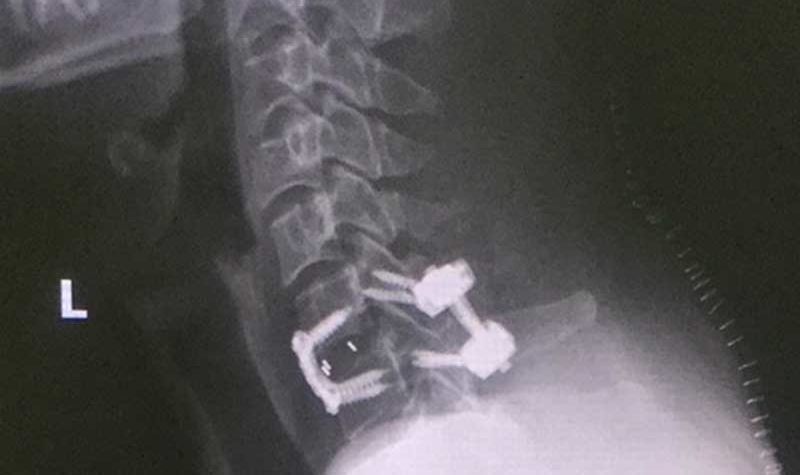 Craig was in the hospital for a week, but the family never had to worry about being stranded in a place where they didn’t know anyone.
Dr. Ellison’s nurse, Donna Causey, lent Brenda her personal car to go back and forth to the hospital for a week so she didn’t have to keep using Uber. Some people asked the nurse why she’d lend her car to people she doesn’t know, but she says she felt like she did know them.
“These people were never pushy, never rude and they just had a spirit about them that you could tell they were people of integrity,” the nurse says. “There was just something laid on my heart that says, ‘Offer this.’ Everything fell beautifully into place, and that’s when you know you’re a part of something great.”
The campground management allowed the couple to keep their RV in the park for an additional week. Brenda doesn’t drive the behemoth, so they found a man to move it into a lot that wasn’t booked for other guests.
Craig’s octogenarian parents made the hourslong trek to South Carolina to see their son, and they attended services at a Baptist church near Tidelands Waccamaw. By the end of the week, parishioners were stopping in to visit Craig. 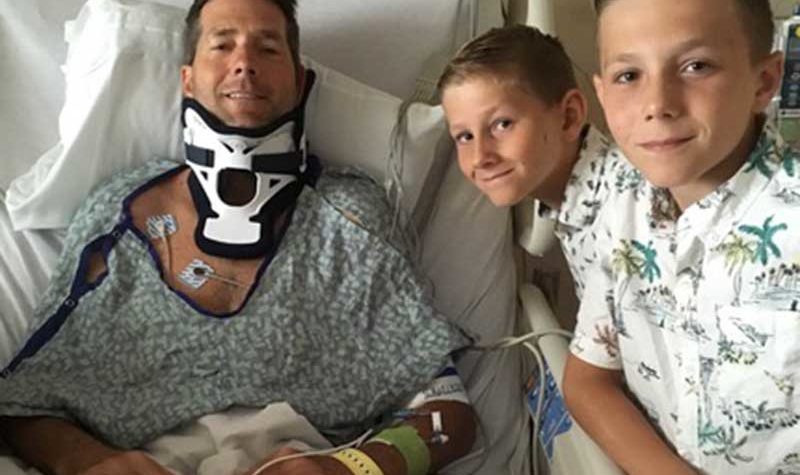 When it was finally time for discharge, a man from the McLeods’ church in Pennsylvania flew to Myrtle Beach and drove the family back north in the RV. Craig sprawled out on one of the motor home’s beds (not that bed) and relaxed.
He missed the start of school, but was settled back in at work by November. Physical therapy is helping him adjust to the changes in his movement.
Dr. Ellison says Craig is cleared, the prognosis is good and he can be as active as he wants. How he avoided paralysis was nothing short of divine intervention, a “combination of the good Lord and some great luck.”