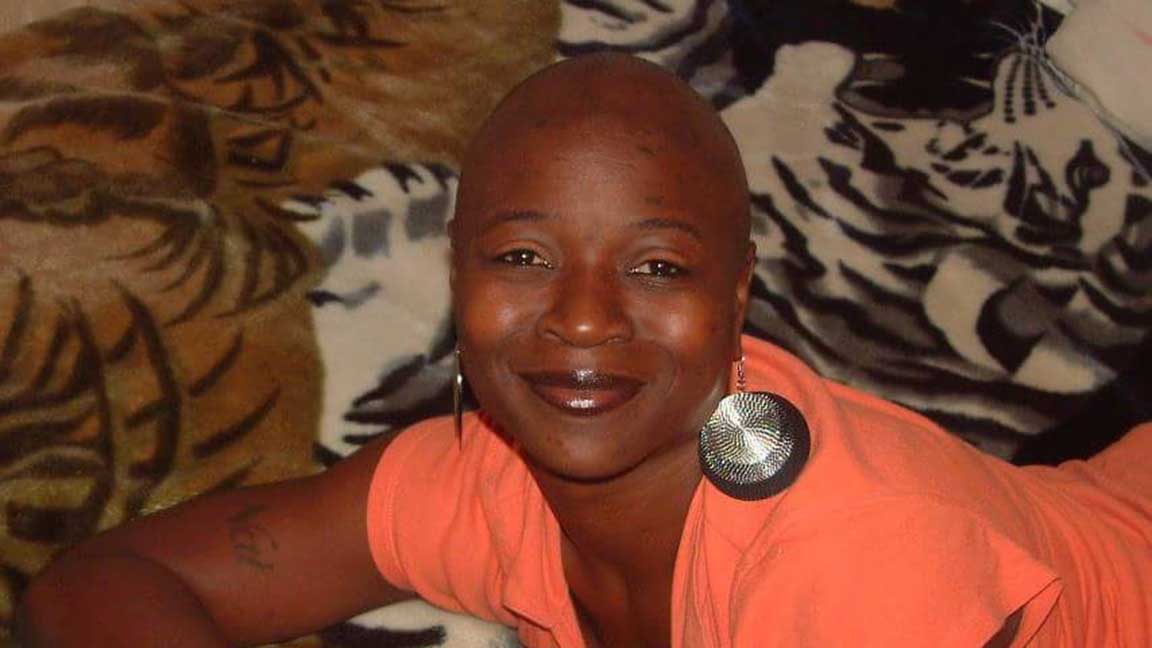 Yuki Turner was sitting on the side of her bed after showering when she noticed something concerning.

A veteran of the U.S. Army, Turner takes to positive habits like breast self-exams. That day 10 years ago, as the Georgetown resident pushed the pads of her fingers into her breasts in a circular motion, something wasn’t right. She felt a lump in her right breast.

“I could’ve squeezed it, touched it, it wasn’t tender and I had no pain,” she says.

A biopsy ultimately established what she had feared. The lump was cancer, even though she had no family history of the disease.

“He (Tidelands Health breast surgeon Dr. Craig Brackett) explained it to me, and when I got in the car to leave the appointment, I started to cry,” the Georgetown resident says.

In Turner’s case, it may have saved her life.

The day of her diagnosis was the only time Turner allowed herself to cry. Although concerned family members couldn’t be so stoic, something inside pulled Turner’s attention to the bigger picture.

“My only thing was, ‘What’s next?’” she says. “I have four kids to worry about, so let’s strap on my boots so I can get this war on and fight it. I can’t sit and cry on it. I just need to know what to do to beat the cancer, and the focus is my kids.” 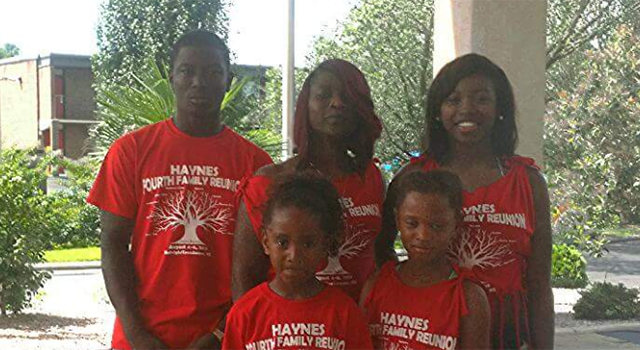 Georgetown resident Yuki Turner was determined to survive breast cancer so she could be there for her children.

Her youngest children were two and four when she was diagnosed. Turner, who worked on Humvees and other military vehicles during her time as a mechanic in the Army, was on a new mission: Defeat the cancer.

Her family rallied. Her brothers helped to care for her children so she could rest and avoid germs. He mother stayed by her side.

“Mom would check on me every two seconds,” she says. “I would be sleeping and she would touch my foot, and I would say, “I’m fine, I’m just sleeping.”

Clumps of Turner’s hair started pulling out in her hands on Thanksgiving Day, 13 days after she started chemotherapy.

“I got up that morning and pulled my scarf off my head and was just walking through the house rubbing my head,” she says. “And my brother, he said, ‘Hey, you have a bald spot.’”

The more she rubbed, the more her hair fell out in clumps. That Thanksgiving was the day she shaved her head and embraced it. The treatment had prompted early menopause, so the wigs were too hot anyway. 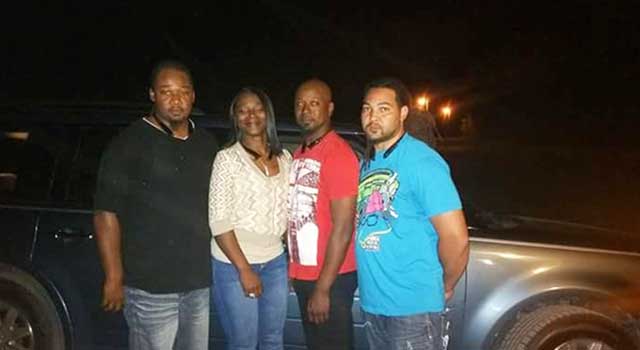 Yuki Turner says support from her family, including her three brothers, was essential in her successful battles against breast cancer.

“My hair doesn’t make me who I am,” she says. “Some people said I looked cute with the bald head…that I have a perfect-shaped head.”

When she dressed well and looked good, she felt better. So she made it a point to always choose to feel better, wearing big earrings, 6-inch high heels and dressing with style despite the chemo and radiation and the sickness they caused.

“I always found the positive in the negative situation of having cancer,” she says. “I just looked at it like, ‘You know I’m going to beat this.’”

She was cleared of the cancer in 2012, and that would be where this story ended if cancer was fair.

Four years later, during a mammogram when she was 39, cancer turned up in the chest wall of her left breast.

Dr. Brackett says it’s not unusual for a woman to have cancer emerge in both breasts because they’re symmetrical parts of the same body.

Turner says she wasn’t as upset the second time around.

Dr. Brackett said he could remove the cancer without removing the whole breast, but Turner decided to undergo a second mastectomy for peace of mind.

She battled herself to embrace this altered part of her body, eventually posting her scars on Facebook to raise awareness.

“Nobody likes to feel rejected, but I did during that time…” she wrote in the post. “I’m not the Yuki I was 7 years ago or even 10 years ago. It may sound crazy but I thank God for my breast cancer because I would never have the faith and strength I have now if I didn’t have to face this journey…”

The post was her way of letting people know she’s comfortable with herself and her scar, she says.

“I have no problem looking at myself after the second time around,” she says. “My scar does not make me who I am. Scars tell my story and my scars tell my journey.”

The end of that journey brought healing in the form of four words: “You’re in total remission.” 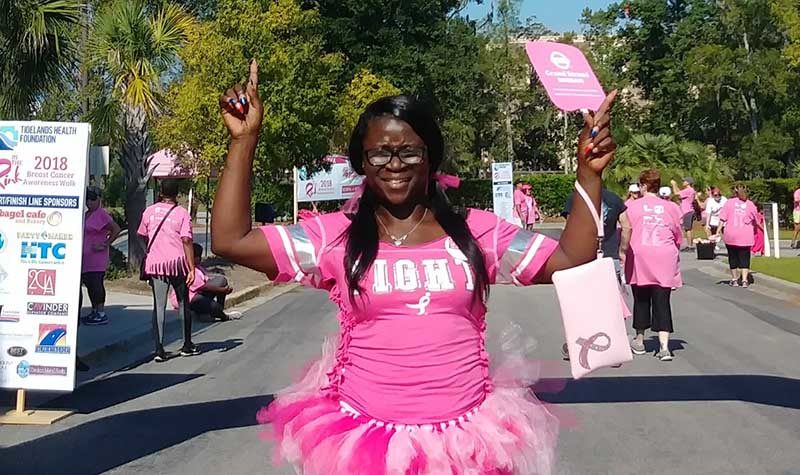 Georgetown resident Yuki Turner, who has twice beaten breast cancer, at the finish line of the 2018 "In the Pink" Breast Cancer Awareness Walk held by the Tidelands Health Foundation.

Turner is now a mentor for other women diagnosed with cancer and she travels to speaking engagements to bring inspiration.

“My biggest thing is you always need a good support system in place and don’t dwell on the fact that you have cancer,” she says. “Get into the mindset to do what you need to do to beat the cancer.”

Along with her family, the Tidelands breast health program led by Dr. Brackett was a major support for Turner, she says.

The program provided support groups and helped her navigate insurance and financial concerns.

The program also helped her find resources such as head scarves, special bras and breast inserts to match her skin tone. She was also a beneficiary of post-surgery underarm pillows that relieve discomfort by allowing a woman to keep her arm and seat belt off of incisions made during breast surgery.

“It’s a remarkable program,” says Turner, who made friends with all the nurses and other personnel. “The staff there, I love them.”

The feeling is mutual.

“Yuki is a different kind of lady,” Dr. Brackett says. “She decided from the very start that the cancer was not going to beat her. She never came in upset and she was always upbeat. She’s full of life, an amazing lady.” 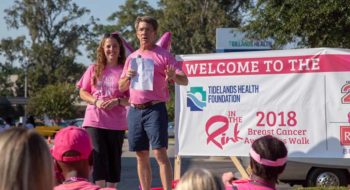 How his dad (and M*A*S*H) led Dr. Craig Brackett to medicine