“Miracle” in Georgetown as local pastor regains ability to speak

“Miracle” in Georgetown as local pastor regains ability to speak 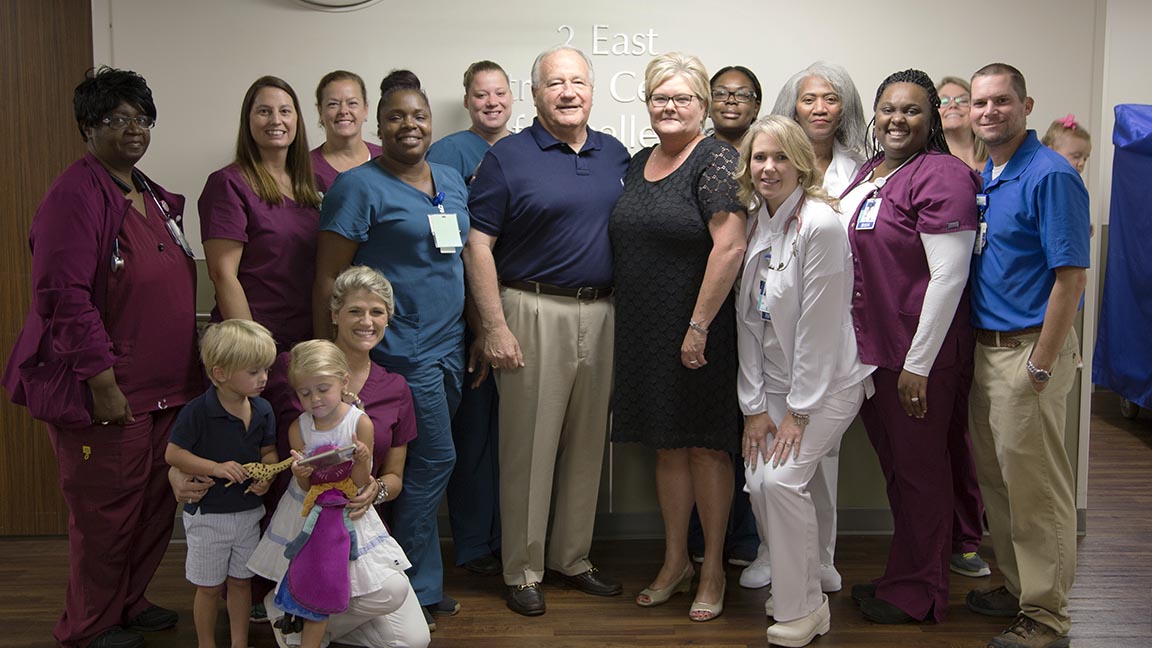 Pastor Tommy Cox and the team that cared for him

T ears of joy streamed down the faces of nearly everyone in the room at Tidelands Georgetown Memorial Hospital as Pastor Tommy Cox repeated the phrase, “You can’t teach an old dog new tricks.”

Only minutes earlier, the leader of the Maryville Pentecostal Holiness Church in Georgetown hadn’t been able to say a word. After undergoing an unrelated procedure on his stomach, Pastor Cox realized his speech was garbled beyond recognition.

“I could move my tongue around, but when I tried to form a word, it wouldn’t work,” he said. “It was a fear that came over me – I’ve never been like that before.”

Pastor Cox’s wife, Ginny, called for help, setting in motion a series of events that would ultimately involve more than a dozen members of the team at Tidelands Georgetown and lead to a new title for Pastor Cox as the “2 East Miracle.”

Pastor Cox was initially admitted to the hospital on Sunday, June 11, after suffering severe bouts of chest pain. Tests ultimately ruled out his heart as the cause but pointed to a problem with his stomach.

It was after a routine endoscopy to evaluate his stomach that Pastor Cox realized the problem with his speech. Alerted by Ginny Cox, nurses in the hospital’s endoscopy unit recognized the signs of a stroke and notified members of the hospital’s stroke team — a group of clinicians with special training in stroke care.

Within moments, Pastor Cox was on his way for a CT scan to verify that he had suffered a stroke and to identify the type and location within his brain. Meanwhile, clinicians on the hospital’s 2 East unit began preparations to care for Pastor Cox, employing the practices and procedures that helped the hospital earn certification from The Joint Commission as an advanced primary stroke center.

By the time Pastor Cox arrived in his room on 2 East following the CT scan, Tidelands Health physician Dr. Faron Kemp was already consulting with an MUSC Health neurologist via telehealth technology to discuss Pastor Cox’s condition and evaluate potential courses of treatment.

A team of nurses and nursing assistants, led by interim 2 East head nurse Kristen Wall, worked cohesively on Pastor Cox’s care. Lab tests had already been ordered and blood samples were taken for analysis. Even Horry Georgetown Technical College nursing students, on hand as part of their studies, were able to help by retrieving supplies.

“Every person in the room knew exactly what to do,” Wall said. “It was a team effort.”

Nurse Joyce Mack, working with pharmacist Ryan Dunne, mixed the clot-busting medication tPA in case it was needed. At Pastor Cox’s bedside was nurse Lindsey Cox, who assessed his level of impairment, and nursing assistant Vanessa Silverman, responsible for monitoring his vital signs.

Nurse Tabitha Jones collected the information gathered by other nurses and entered it into the health system’s computer system so it could be tracked and evaluated by Dr. Kemp and the MUSC neurologist consulting on the case.

Outside the room, nursing assistants Shawngerlette Hayward and Iywanna Gibson communicated with the family to help them understand what had happened and how the clinical team was responding.

“That stroke team was unbelievable,” Pastor Cox said. “They did everything they could possibly do.”

The pivotal moment in Pastor Cox’s care came with the decision to administer tPA.

Once it was given, nurse Lindsey Cox continued her assessment of Pastor Cox’s condition by asking him to repeat, “You can’t teach an old dog new tricks,” a standard phrase used by the hospital’s clinical team for speech evaluation following a stroke.

At first, the words remained jumbled.

“The second time I said it, one word came out very clearly,” Pastor Cox remembered. “Then she asked me to say it again, and the third time three words came out.

“By the fourth time, I could say the whole sentence.”

The room erupted in cheers and tears as it became clear he had regained his ability to speak, Pastor Cox said. It’s an outcome he attributes to the stroke team’s training and the hand of God.

“It was a glorious time, and I will not forget it for the rest of my life,” Pastor Cox said. “God was with each of them to help them perform that miracle.

“You could sense the presence of God all through that place.”

“The emotions that ran through that room, it was so great,” she said. “It was an incredible day to be a nurse.”

Pastor Cox said the ulcers discovered during the endoscopy continue to heal, and he has few lingering effects from the stroke. He’s heeding doctor’s orders to avoid preaching for six weeks, but he plans to use his experience as a tool to help reinforce others’ faith, both in God and in medicine, when he returns to the pulpit.

“God put me in that position so that I could give someone else inspiration,” he said. “I’m a miracle.”