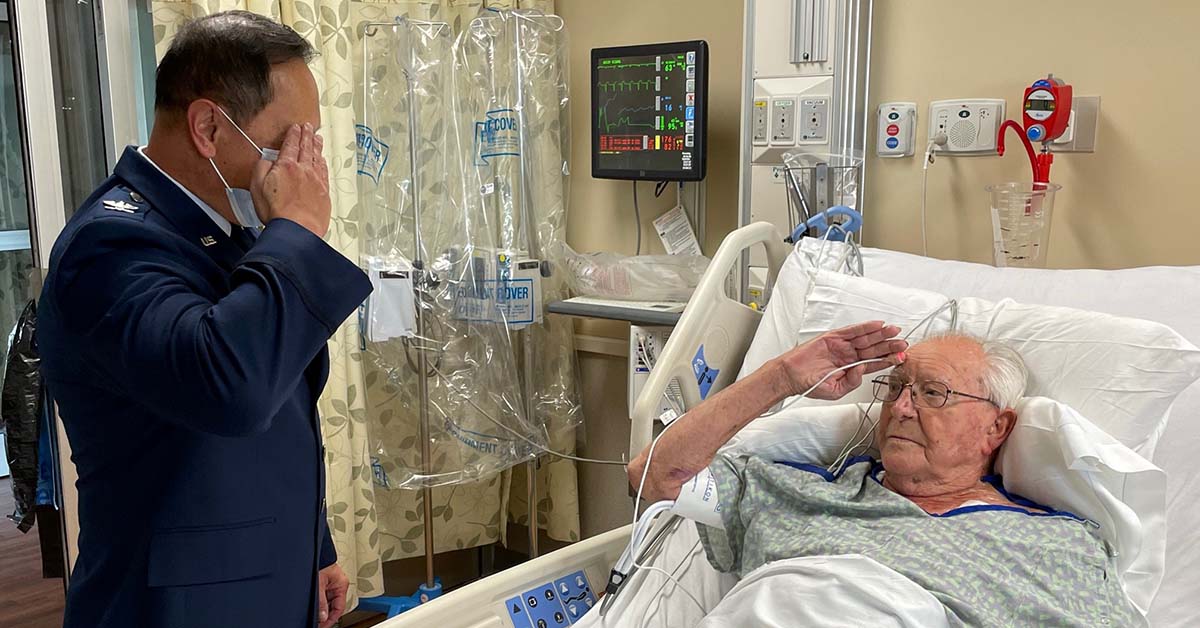 A Veterans Day celebration came a day early for 99-year-old, decorated World War II veteran Clarence “Chuck” Tompkins.
During his four-day stay at Tidelands Waccamaw Community Hospital for implantation of a pacemaker, Tompkins had his care team in awe with the firsthand accounts of serving in the Battle of the Bulge and the first wave of D-Day in Normandy – history the rest of us can only read about in books or watch in documentaries. He served in Darby’s Rangers of the U.S. Army 4th Infantry Division.
His battle wounds are badges of honor. He was slightly wounded in France, but persevered. During the Battle of the Bulge, he was severely wounded after being shot four times by a machine gun.
His valiant service and sacrifices led to nearly a dozen special decorations, including two Purple Hearts, a Silver Star, two Bronze Stars and two medals from France, including the Medal of the Jubilee of Liberty. In May, he served as honorary grand marshal of the Myrtle Beach Military Appreciation Days parade.
When Tidelands Health hospitalist physician Dr. Richard Cutchin learned of his patient’s decorated service, he collaborated with Tidelands Health leaders to show the health system’s appreciation for this “true American hero” on the eve of Veterans Day.
“His story is amazing. We have to do something for him. I just felt compelled,” Dr. Cutchin said. “We have very few of these veterans still with us. Each and every one of them deserve every bit of gratitude, honor and respect that we can bestow on them.”

On Wednesday afternoon, Dr. Cutchin, senior leaders and Tompkins’ care team had an informal bedside ceremony for the hospital’s most decorated veteran patient.
Tidelands Health family medicine physician Dr. Henry Lau, a retired colonel with the U.S. Air Force, swapped his white coat for his military full dress uniform to present Tompkins with an encased American flag and the team’s eternal gratitude for his service and sacrifices. 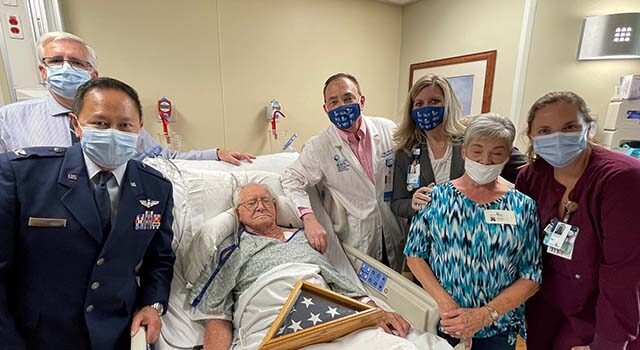 Dr. Gerald Harmon, vice president of medical affairs at Tidelands Health and also a decorated veteran, penned a special note and gifted a military challenge coin. Dr. Harmon, in Chicago for duties as president of the American Medical Association, joined the patient room ceremony via FaceTime.
“Our team at Tidelands Health is honored to provide care in your time of need,” Dr. Harmon said. “All of us are grateful that you served America in such a time of need also.”

During his stay at Tidelands Waccamaw Community Hospital, the sharp-as-a-tack Surfside Beach resident kept his health care team entertained and intrigued with his firsthand stories of war battles, endless positivity and spontaneous bouts of energy that – at least once – had him showing off his ballroom dancing moves.
He brought to life the war stories his nurse Samantha Saunders, who earned a bachelor’s degree in history from Virginia Commonwealth University, had learned about in books and documentaries. 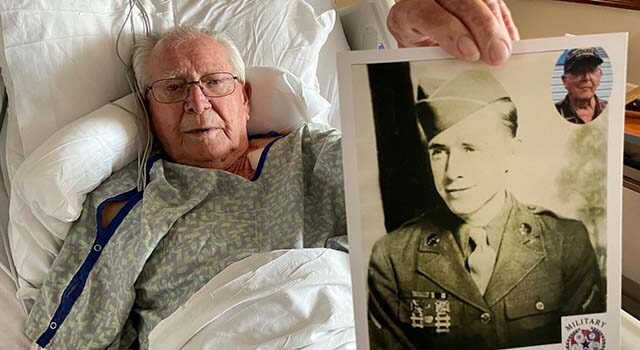 “It is just a treat to take care of him,” she said. “He’s so positive and just talks to you about everything. He’s sharp and has a wonderful memory. He is quite lovely.”
Tompkins’ daughter Pat McCormick, who was in on the surprise presentation, captured the moment on video. She also proudly brought 8×10 glossy photos made when he served as honorary grand marshal of the Myrtle Beach Military Appreciation Days parade in May. Tompkins graciously gripped a Sharpie to sign one for every health system leader and care team member who had a hand in this special moment.
“They have been absolutely magnificent,” McCormick said. “Every day since we came into the ER – it’s been phenomenal. They are so caring.
“I feel like we have a big family here now.”